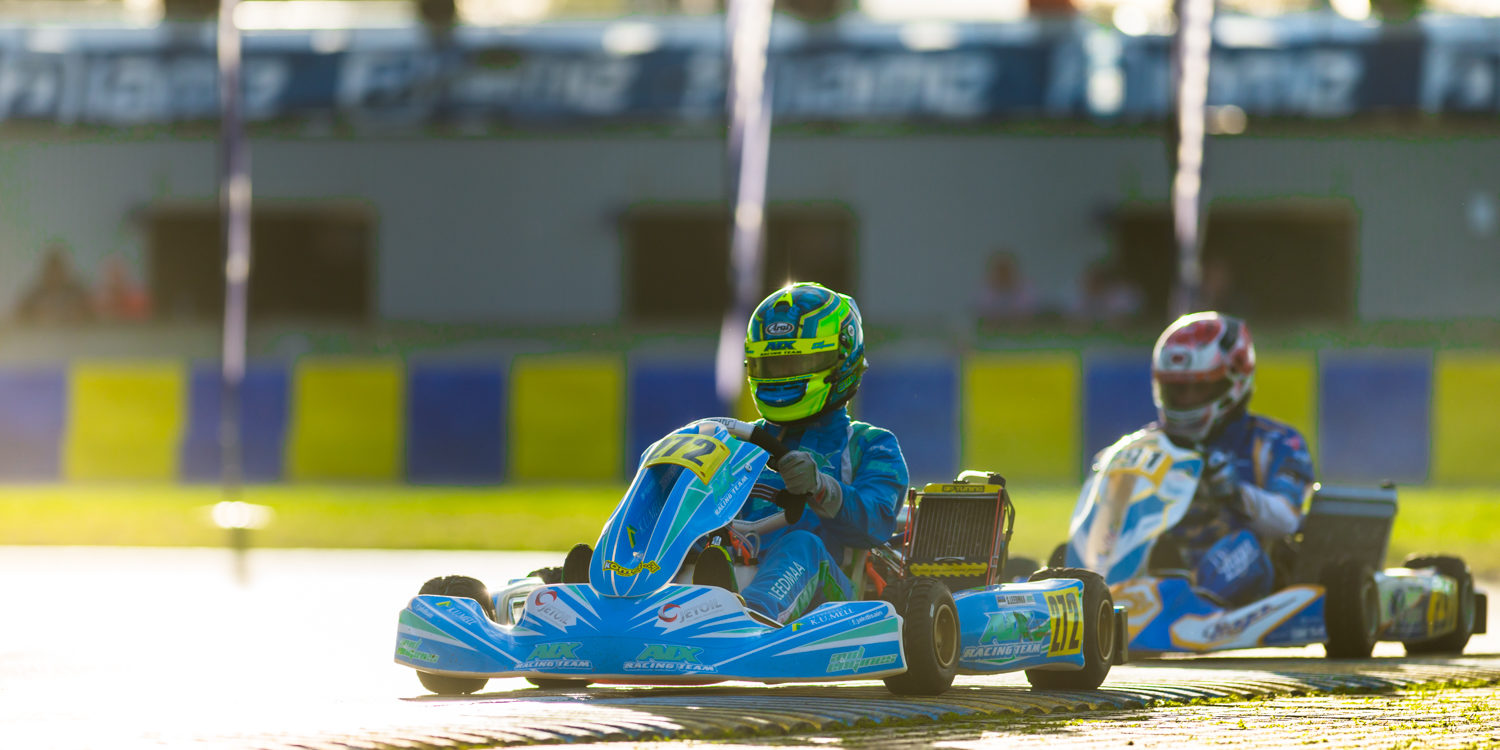 With the rain gone and the track constantly drying, the afternoon sessions would see a battle of setups as well as drivers in difficult conditions for the senior drivers. This would lead to some surprise results with some of the favourites in each class left out of position. 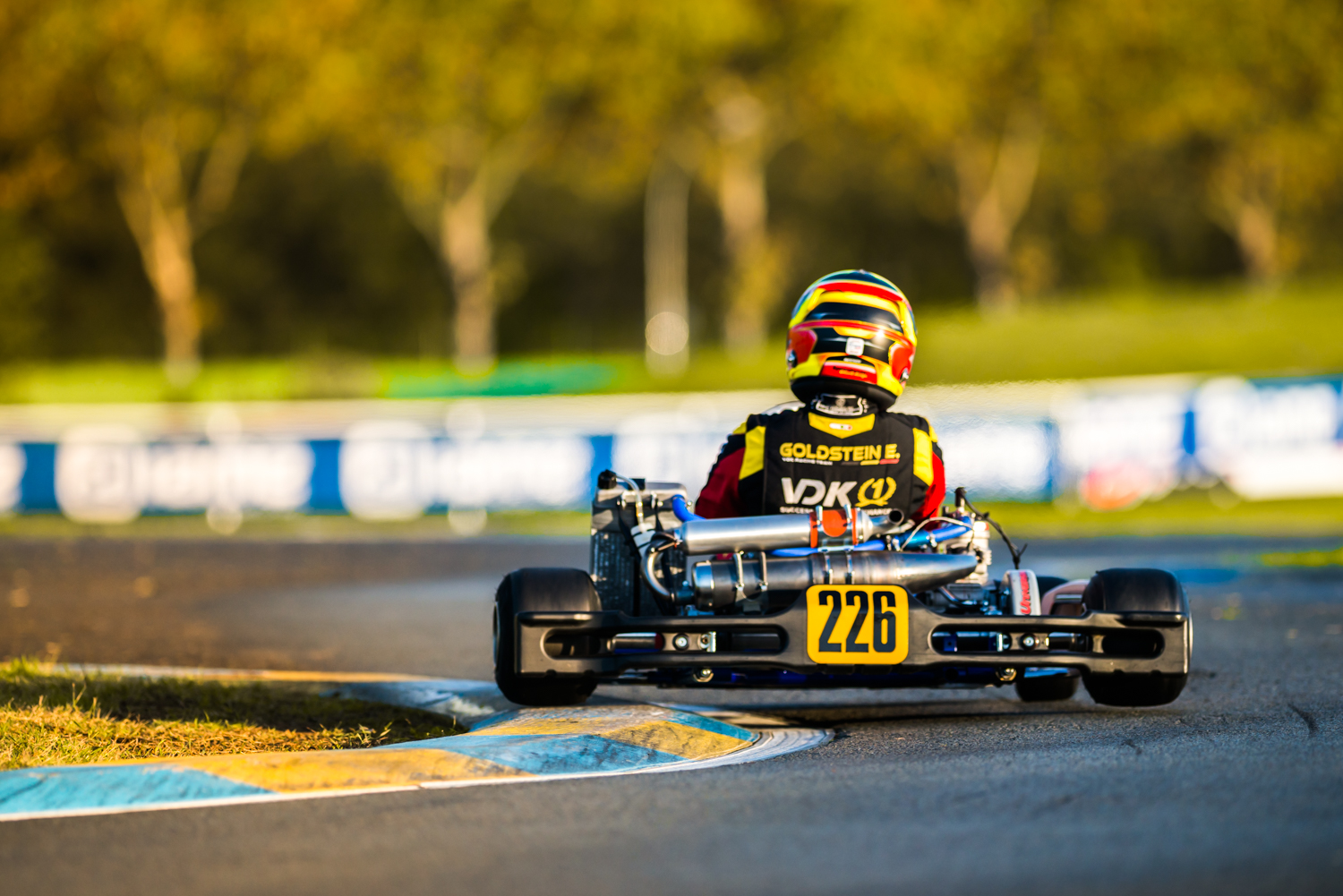 The seniors would be the first to take on the damp and drying track in qualifying. For the first group it was a case of trying to find the grip and there was certainly an element of who had set the kart up the best. On home soil Enzo Leveque (FRA) seemed comfortable out front, but as others began to find their rhythm there would be changes at the top with Rory Hudson (GBR) going fastest right at the death before Leveque hit back on his final lap.

Group two were eager to take to the circuit and as the sun came out, with four minutes to go the times quickly began to fall. Ben Barnicoat (GBR) did some of the early leading, with Charles Tesniere (FRA) also having his time at the top. But it would eventually be Joey van Splunteren (NED) who went fastest on the final lap to continue a trend started by Leveque.

Group three saw a huge turning point in qualifying with times improving by over five seconds! By the end of the session there were improvements by a second per lap and it was now a case of lining yourself up perfectly for the last lap. It appeared some of the major players had run out of steam too early, but O’Neill Muth (GER) hadn’t and nailed his final lap to beat Thomas Turner (GBR) to the top by 0.007 seconds!

As group four hit the track, conditions had vastly improved with times ten seconds quicker than the first. Whoever was fastest would be pole position which would make the battle even more intense! From the off Gus Lawrence (GBR) would set the pace and further consolidated his pole position with a gap of almost three tenths to Rivaldo van de Westelaken (NED).

Lawrence will now be classified pole, with Muth second, van Splunteren third and Leveque fourth. Second in each group will place fifth to eighth with the same applying for the rest of the field. In a grid of 134 drivers a bad session is very costly and paying the price for being out of position are the likes of Mark Kimber (GBR), Clayton Ravenscroft (GBR), Mari Boya (ESP) and Isac Valtonen (SWE) who placed 47th, 74th, 81st and 129th respectively. 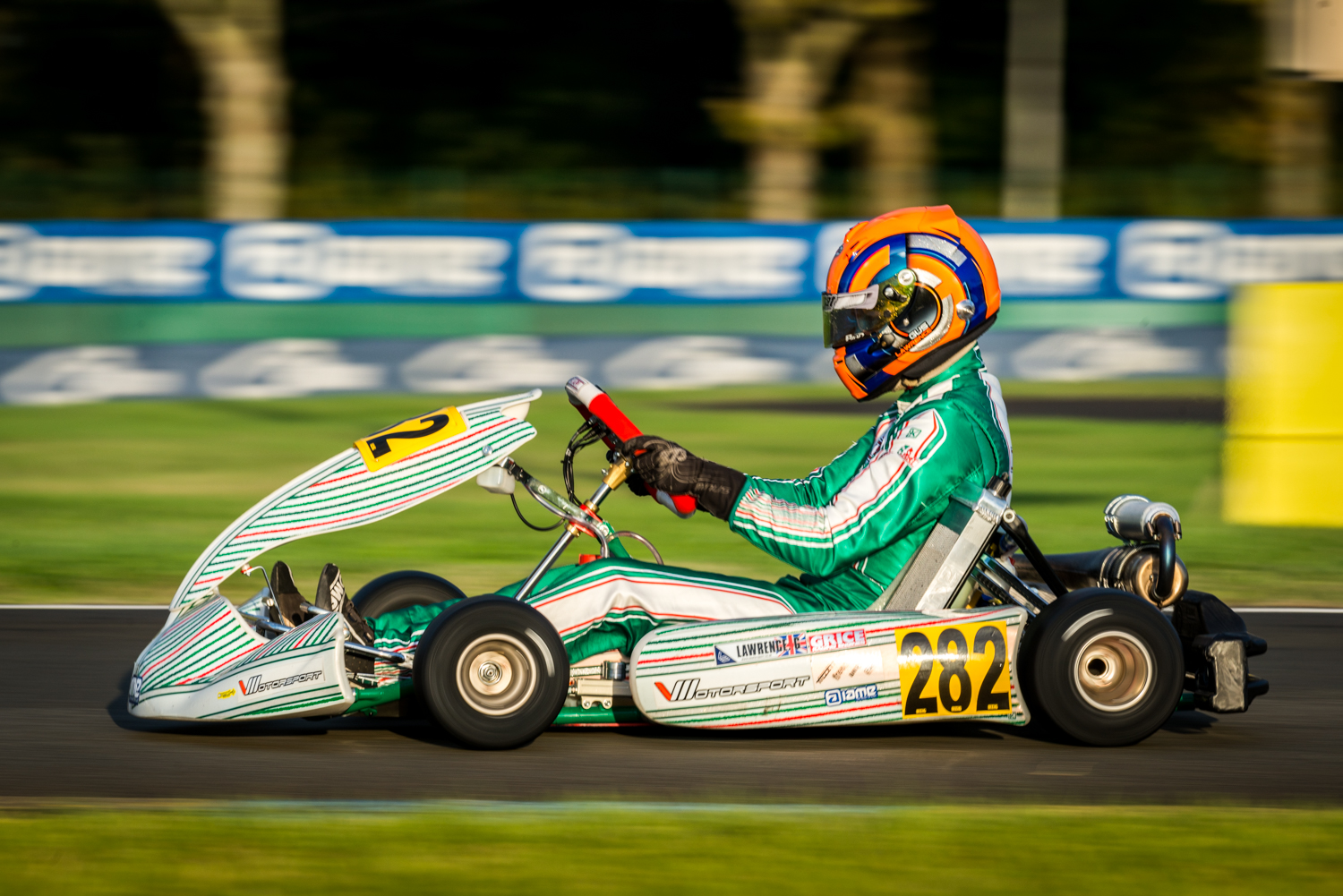 Gus Lawrence (GBR) with gap at the top of X30 Senior

New for 2019, the Pro class has had everyone talking this week with its star studded grid making it almost impossible to predict. With a softer tyre in use maximising their potential was key with some pacing themselves for a big push at the end. The final laps were an exciting watch with the top ten split by less than two tenths of a second, but fastest would be Dean MacDonald (GBR). Nikolas Pirttilahti (FIN) and Franck Chappard (FRA) were just hundredths behind with Harry Thompson (GBR) and Louie Westover (GBR) rounding out the top five. Whilst they excelled others struggled with Lorenzo Travisanutto (ITA), Danny Keirle (GBR) and Taylor Barnard (GBR) all out of the top ten which should make the heats even more exciting! 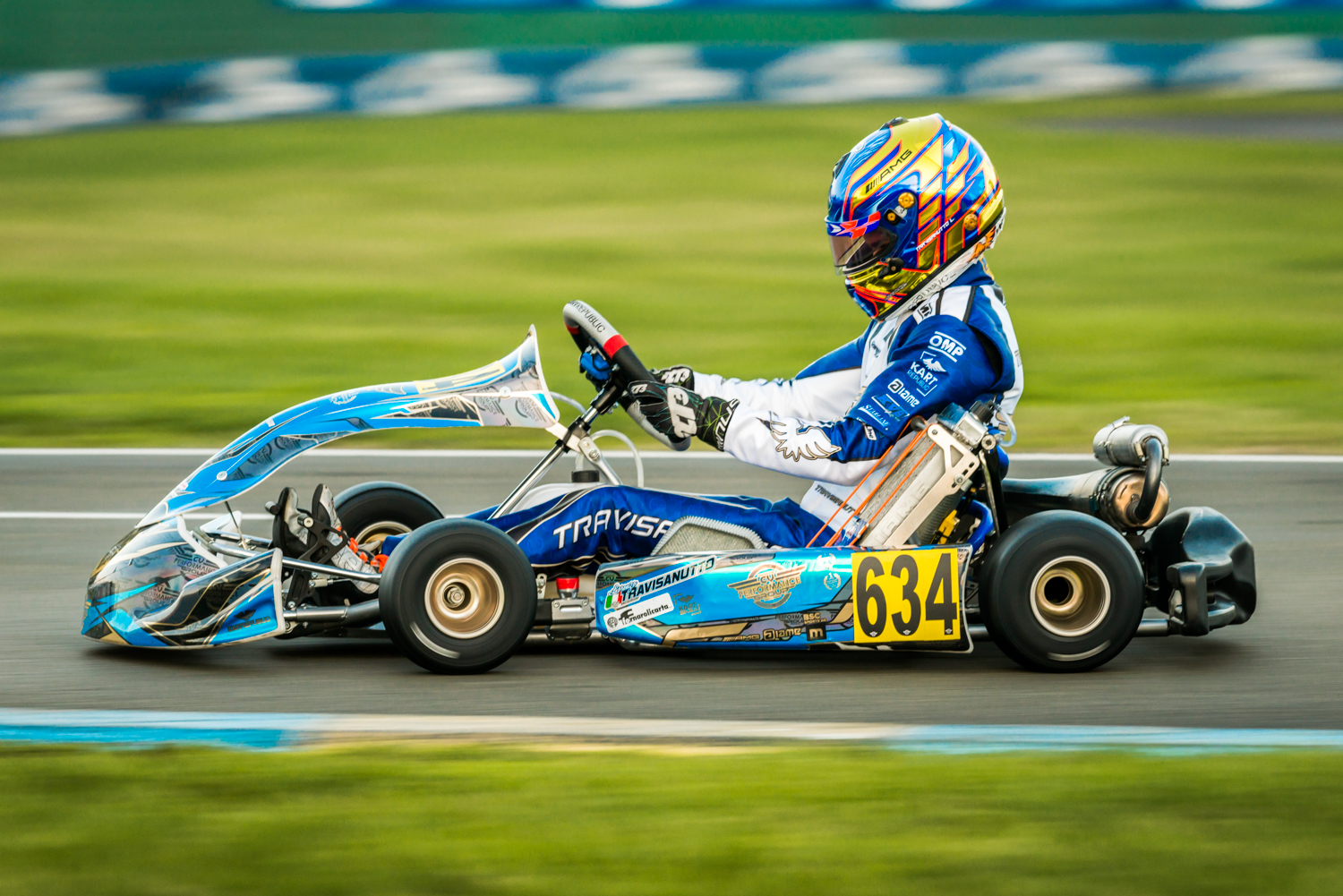 Back to back World Champion, Lorenzo Travisanutto (ITA) struggled to break the top ten in Pro

Estonia’s Sten Dorian Piirimägi (EST) went through the gears quicker than anyone else in qualifying taking pole position by 0.271 seconds! Quique Bordas (ESP) and Thierry Delre (BEL) were both quick enough to set fastest sectors of the session making Piirimägi’s lap even more impressive. It is a message to the rest of the field that he is the driver to beat and amongst those challenging him is former British Touring Car Champion, Ashley Sutton (GBR), who is racing in the class for the first time. 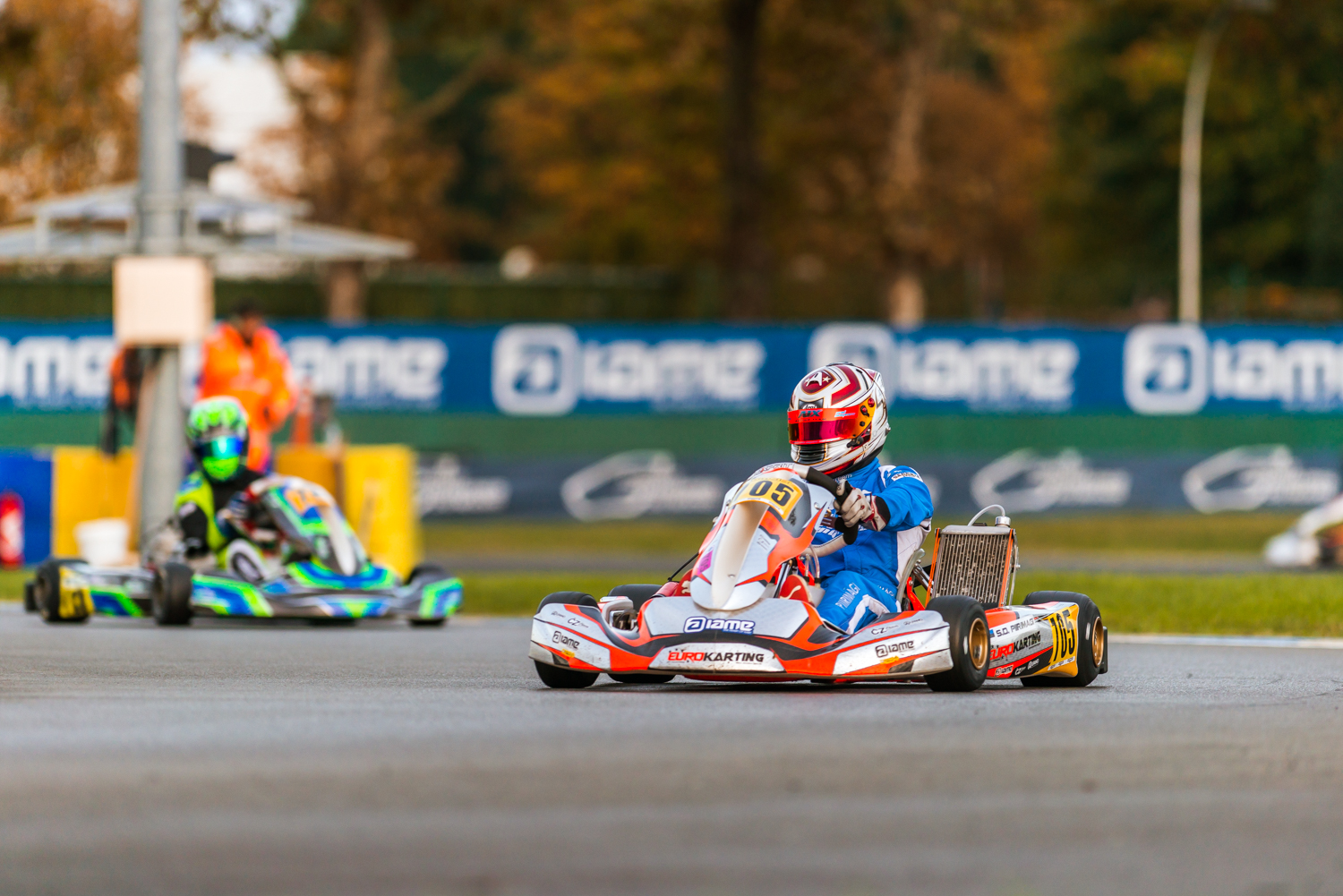 Could this be the year for Sten Dorian Piirimägi (EST)?