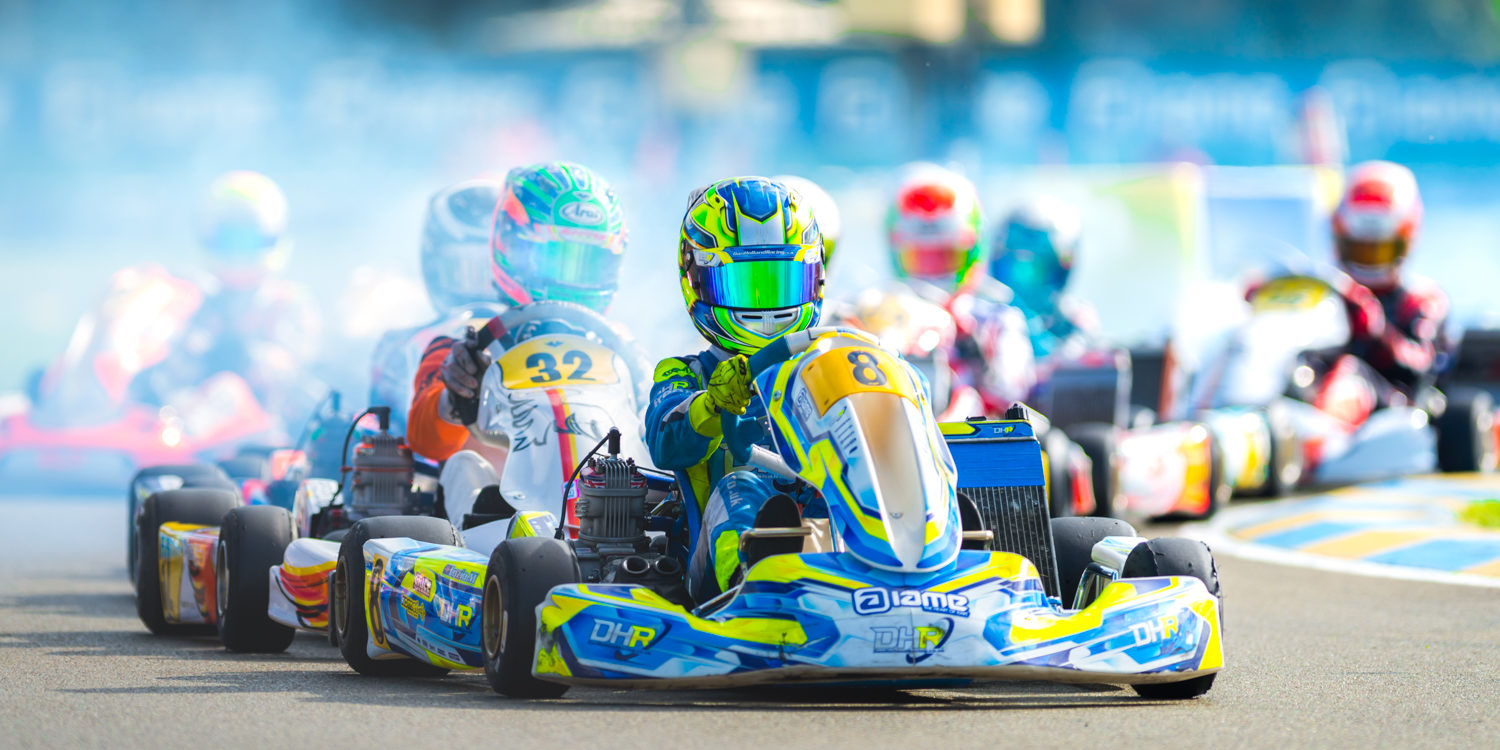 Things are beginning to heat up in Le Mans! With Pre Final grids decided in Master and Mini, dry conditions brought with it superb racing with some drivers having their final heats of the week before we move into the final stages of the IAME International Final. 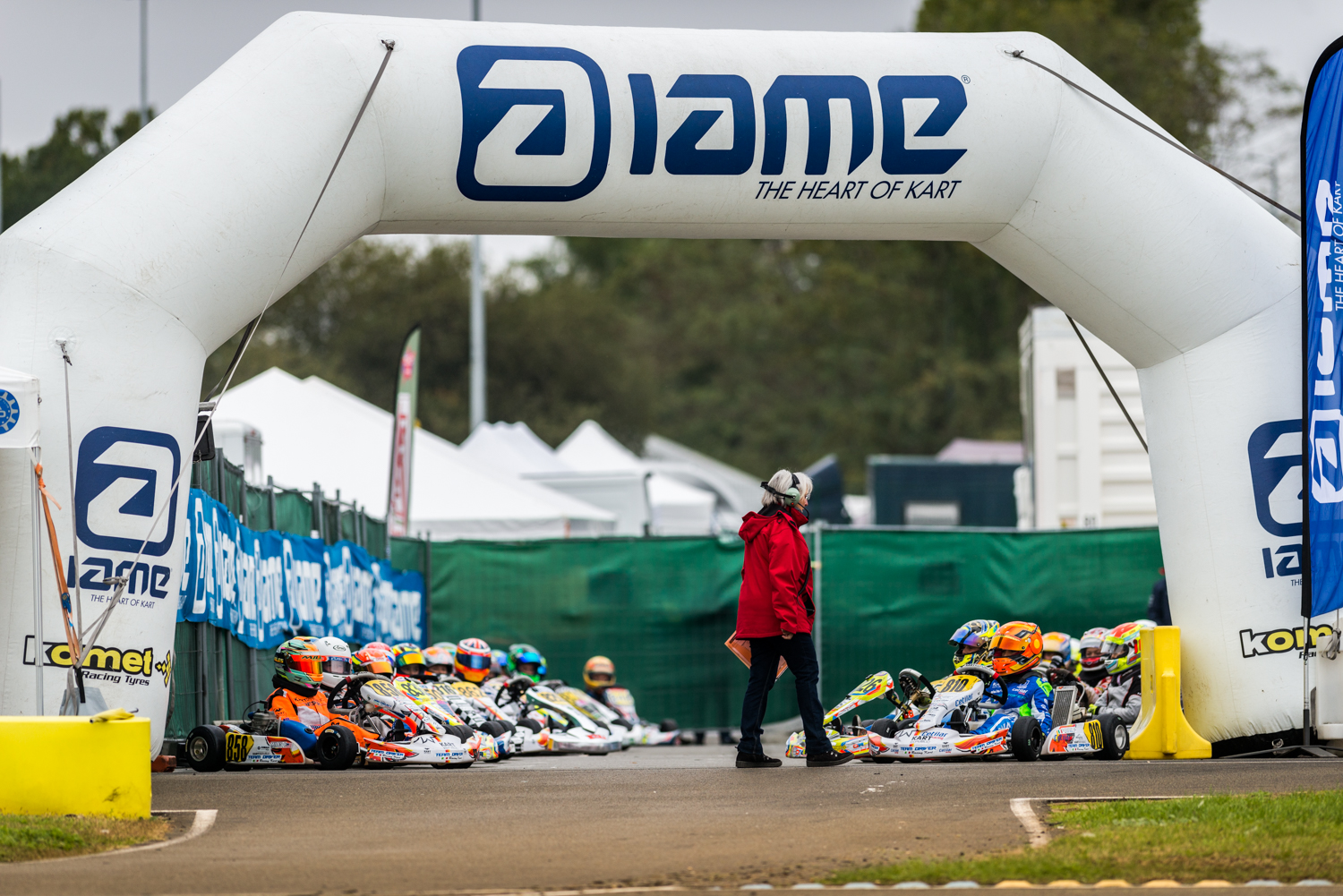 Junior – More drivers in the mix

The Junior class only expanded on it’s unpredictability in the second day of heats with the list of winners increasing. New names to the list were Marlon Hernandez (FRA) who wisely chose wet tyres for heat one, with Antonis Sofroniou (GBR), Milan Kok (NED) and Ben McDowell (IRL) all doing the same behind and being rewarded with gains of 31, 29 and 21 places!

Alessandro Tudisca (BEL) has been knocking on the door of a win all week and made it there in his first heat this morning with Aaron Walker (GBR) also impressing in the dry conditions to win from 16th on the grid! Oliver Gray (GBR) and James Wharton (AUS) were the only to add to their list of wins and are now looking strong at the head of the class.

However, ahead Oliver Bearman (GBR) is still looking like the driver to beat with a second and third place today still leaving him at the top of the pile. He narrowly missed out on a third victory to Robert de Haan (NED) in the final race of the day which was one of many to go all the way to the wire.

Tomorrow will see the final heats take place before the points are added up. Then in the afternoon the Final C and Final B races will take place where only a win will be good enough to take you any further in the event. 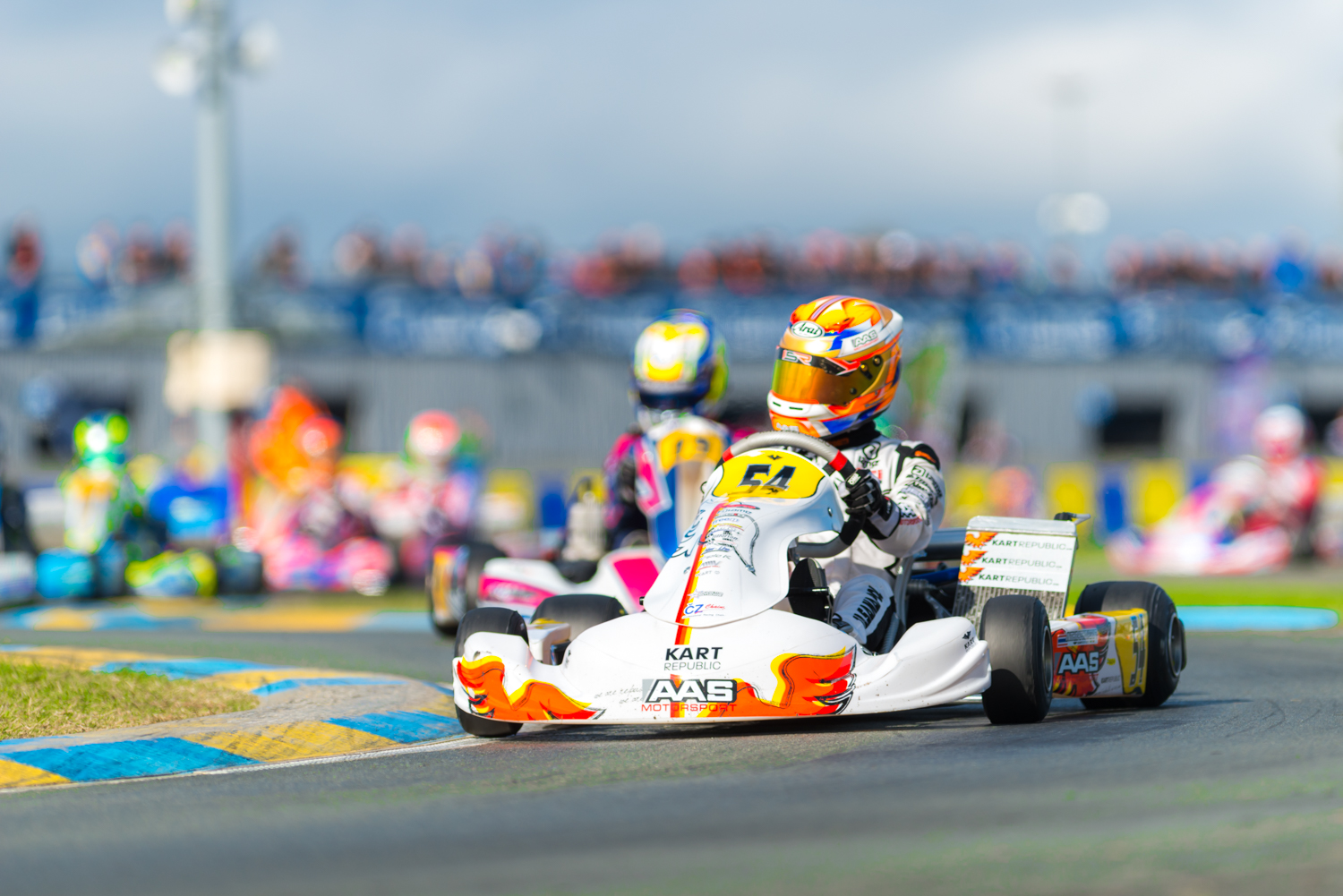 Master –  Poncelet and Bielande on front row for Pre Final

A second in his final heat today was good enough for Julien Poncelet (FRA) to secure a pole position start in the Pre Final on Saturday. It’s a result that will be well received in Le Mans, but he’s going to have tough competition in Sebastian Bielande (BEL) who will line up alongside. Bielande came out on top when the pair fought for victory in today’s heat which will give the Belgian confidence, although Poncelet may argue he didn’t need to fight for the win.

Either way it sets up a thrilling contest, but we cannot discount the other front runners in the field. Kenneth Hildebrand (EST) will start third and has been getting stronger and stronger as the weekend has progressed. Eric Chapon (FRA) and Stephen Nuvolini (FRA) will be keen to win on home soil in fourth and fifth as will Johan Renaux (FRA) who ended his heats strongly with a win putting him eighth for the Pre Final.

With 33 already qualified for that Pre Final there is still one more place up for grabs which will be decided through Final B. Jussi Kohtala (FIN) and Angelo Ardito (ITA) will be on the front row and are going to have a tough task staying there with only first place good enough to race on Saturday. 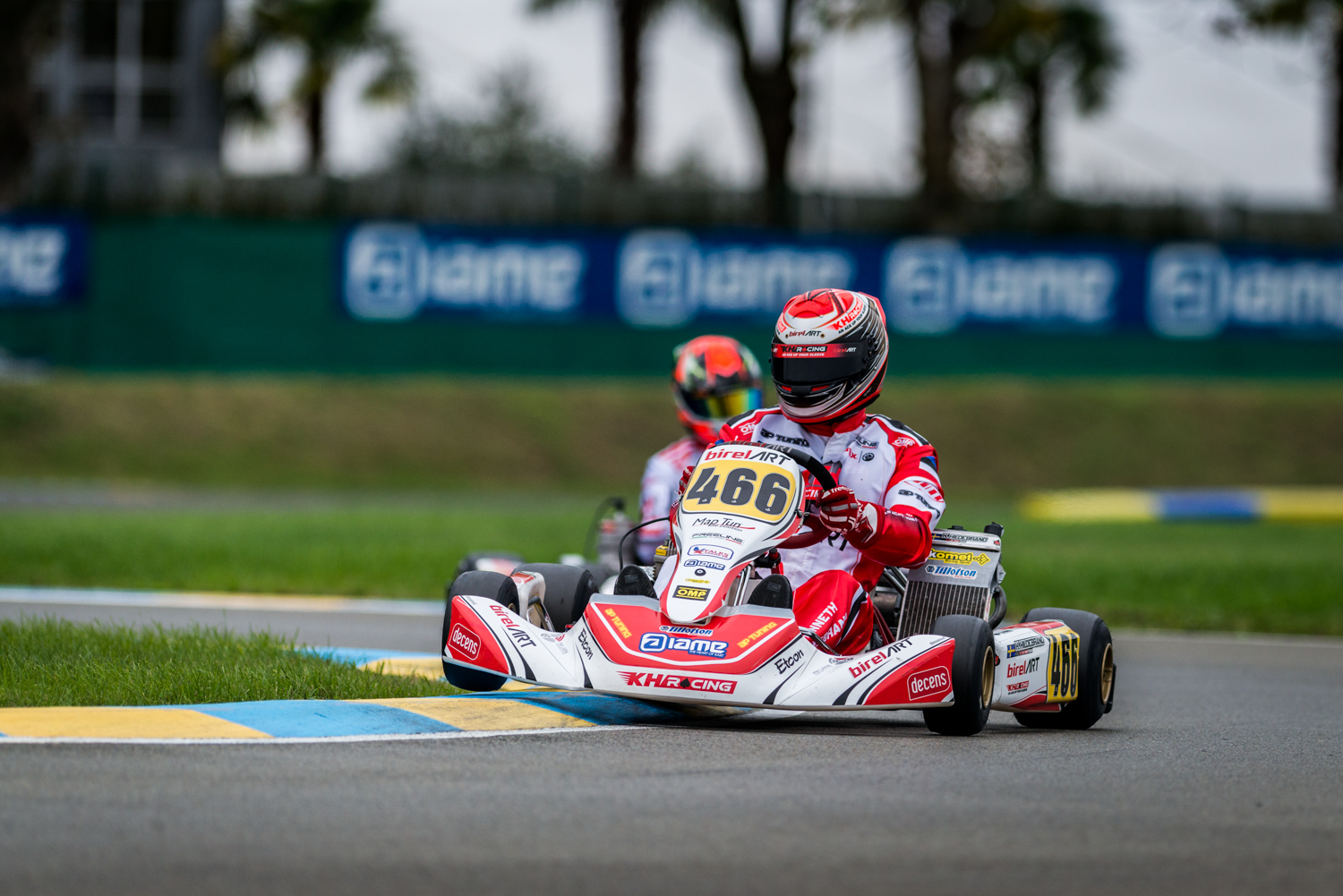 The heats have now been completed in the Mini class with Freddie Slater (GBR) taking a comfortable pole position. The British driver put himself at the top with another win in his third heat today. Freddie’s worst finish in the heats so far has been third place and the reigning Vice Champion is looking in a very strong position to go one better in 2019.

Joining him on the front row will be Kean Nakamura-Berta (JPN) who has also took a win in the heats along with Christian Miles (USA) who was off to a winning start this morning. Harry Burgoyne (GBR) splits the pair in the standings to line up on the inside of row two with Leo Robinson (GBR) and William Go (CZE) on row three.

Sebastiano Pavan (ITA) hasn’t quite been able to reflect his qualifying pace and a bad result in heat two for Max Garcia (USA) has seen his pole position turn into an eighth at the end of the heats. Brandon Carr (GBR) and Pacome Weisenburger (FRA) are down the field after some disappointing luck, but at least they have made the finals and can take a rest day tomorrow with Final B taking place at 16:30 GMT+2 tomorrow with Maximillian Dexter (ARE) and Angelo Nugnes (ARG) heading the field. 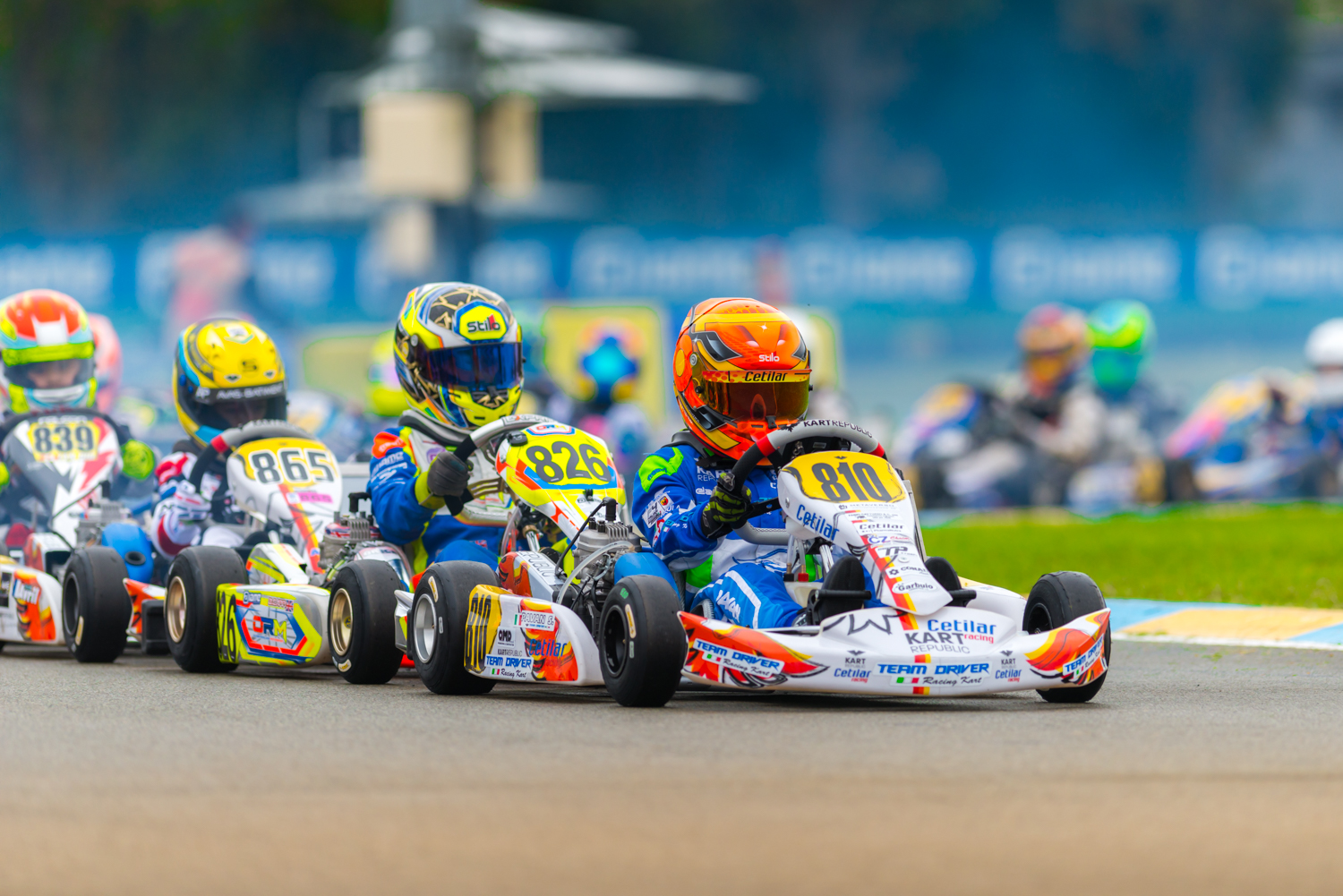 Sebastiano Pavan (ITA) will start 7th in the Pre Final

Zach Knight (GBR) has put himself in a strong position to grab pole for the Pre Final on Saturday after taking his second win in the third heat today. He was kept honest by Andrei Dabija (IRL) but did enough on the final lap to take the win. Tadgh Buckley (IRL), Michael Gray (IRL) and Jack Buckley (IRL) all moved through the field well to round out the top five whilst Alex O’Grady (IRL) and Hugo Martinello (FRA) struggled finishing sixth and eleventh respectively.

All has given Knight an advantage out front, but there is still one more race tomorrow where anything can happen, as often does in the IAME International Final!