IAME Warriors Final 2021, all the winners! 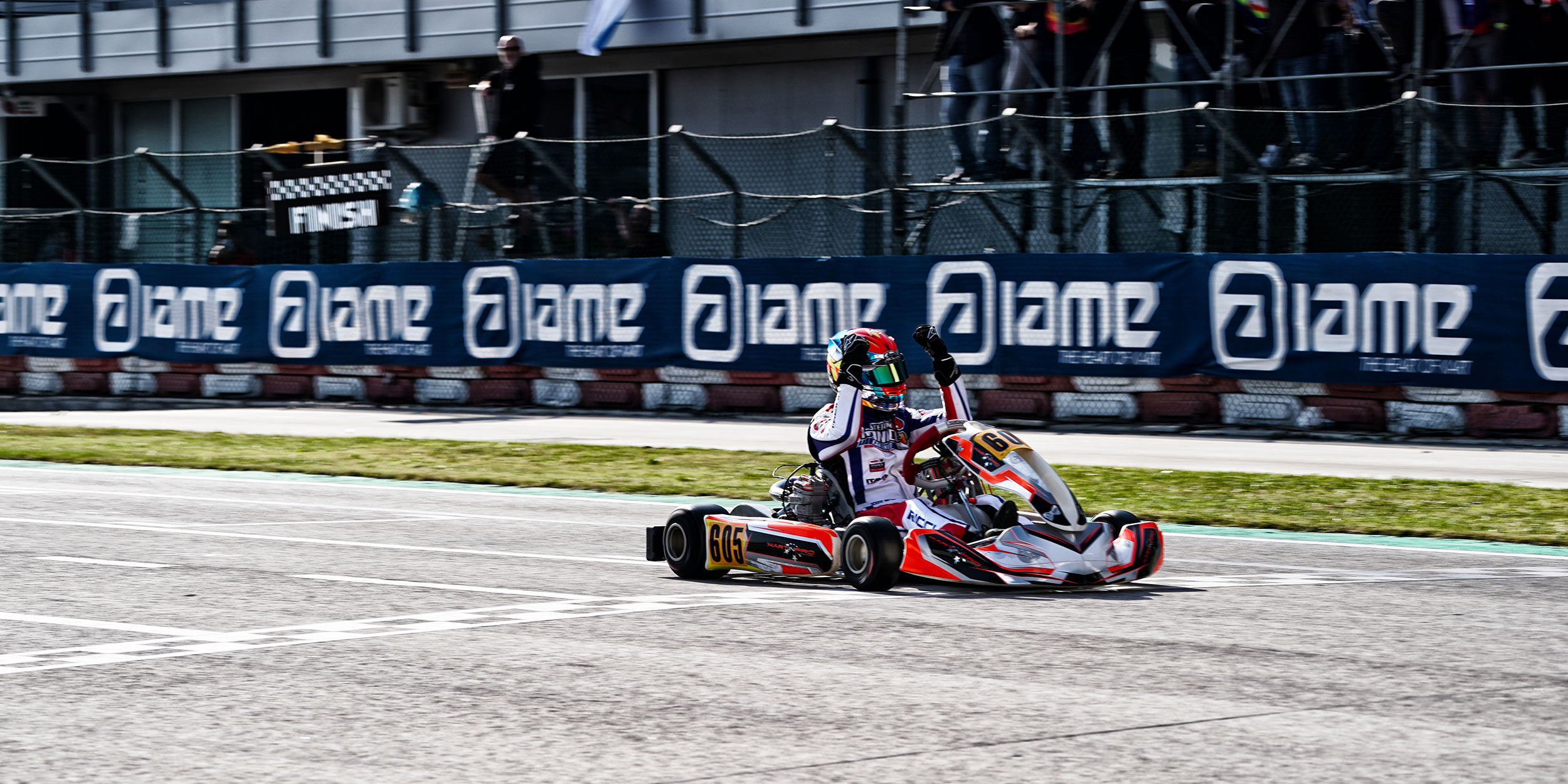 Edition 2021 of the IAME Warriors Final successfully ended at the Adria Karting Raceway on Saturday, October 23 after four days of intense competition and a participation of 300 of the best drivers of the national IAME series from 29 countries. These drivers have been competing among the fields of the strongest teams in categories X30 Mini, X30 Junior, X30 Senior, X30 Master and Z-I.

The much awaited finals in Adria elected the winners of this important event at the end of exciting races run against all the excellent drivers partaking in this world-class event. The list of winners that are now part of the prestigious IWF Hall of Fame follows:

The other British driver Roman Kamyab (#102 Fusion Motorsport/KR-Iame) was penalized instead and lost P8. 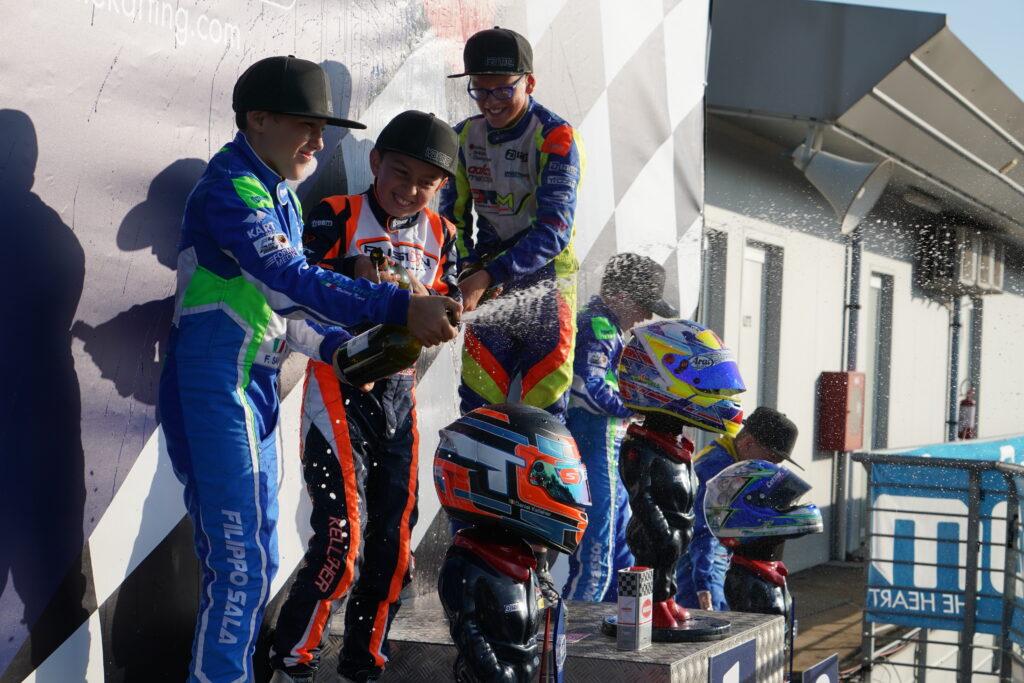 In the shifter category Z-I the duel on top between the two Italians Moritz Ebner (#706 Tec Tav/BirelART/Iame-Komet), who posted the pole position in qualifying and won the Prefinal, and Mauro Simoni (#717 OK1 Racing Team/OK1-Iame-Komet), who claimed two wins as Ebner in the heats, continued. Moritz Ebner took the lead of the final early on and was chased by Mauro Simoni and the Swiss Thomas Cypers (#705 Cypers/Mach1-Iame). In the closing stages of the Final, Mauro Simoni had to retire due to a technical problem while Moritz Ebner was crossing the finish line as the winner. The second place was therefore inherited by Thomas Cypers and the third by the Swede Albin Karlsson (#711 KH Racing/BirelART-Iame). The fourth place went to the Italian Matteo Franco Segre (#719 OK1 Racing Team/OK1-Iame), who led the Belgian  Sam Claes (#713 Claes/Sodi-Iame). The latter was followed by the Dane Thomas Hamann Dam (#707 Dam Racing/Sodikart-Iame) and the Norwegian Christoffer Schwabe (#700 Schwabe/KR-Iame). The eighth place went to the Italian Marco Cecco (#720 OK1 Racing Team/OK1-Iame). 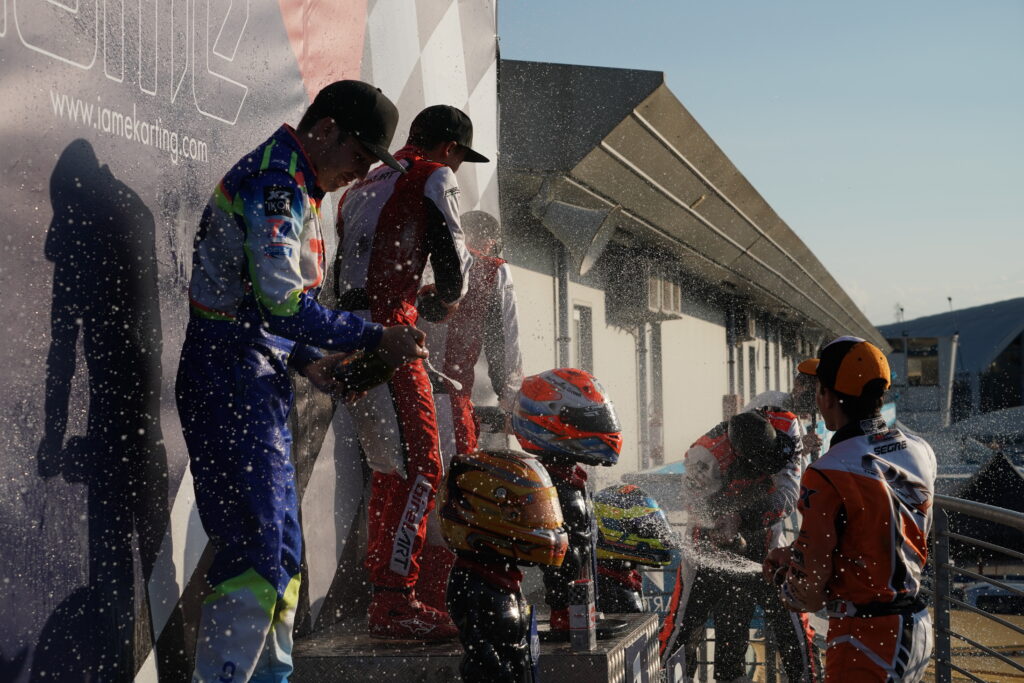 The French Thomas Ricci (#605 Ricci/Tony Kart-Iame-Komet) kept his momentum in the Final after claiming the pole position in qualifying practice, and winning the heats and the Prefinal. In the Final, the Belgian Kevin Lemmens (#628 EGP Racing Team/Kosmic-Iame) and the French Maxime Bidard (#608 Bidard/Red Speed-Iame) closed in the order behind Ricci. The other two podium positions went to Ireland’s Richard Faulkner (#633 Faulkner/Tony Kart-Iame) and the French Eric Chapon (#611 Chapon/Alpha Karting-Iame), who managed to overtake the Norwegian Tommy Nordvang Kvakkestad (#600 Zanchi Motorsport/Tony Kart-Iame) in the closing stages. The top ten was rounded off by the Dutch Jim Ringelberg (#620 PDB Racing Team/Parolin-Iame), the Argentine Ignacio Vivian (#601 Vivian/KR-Iame), the Belgian Thierry Delre (#624 Delre/Mach1-Iame) and the Estonian Kenneth Hiltdebrand (#616 KH Racing Team/BirelART-Iame). 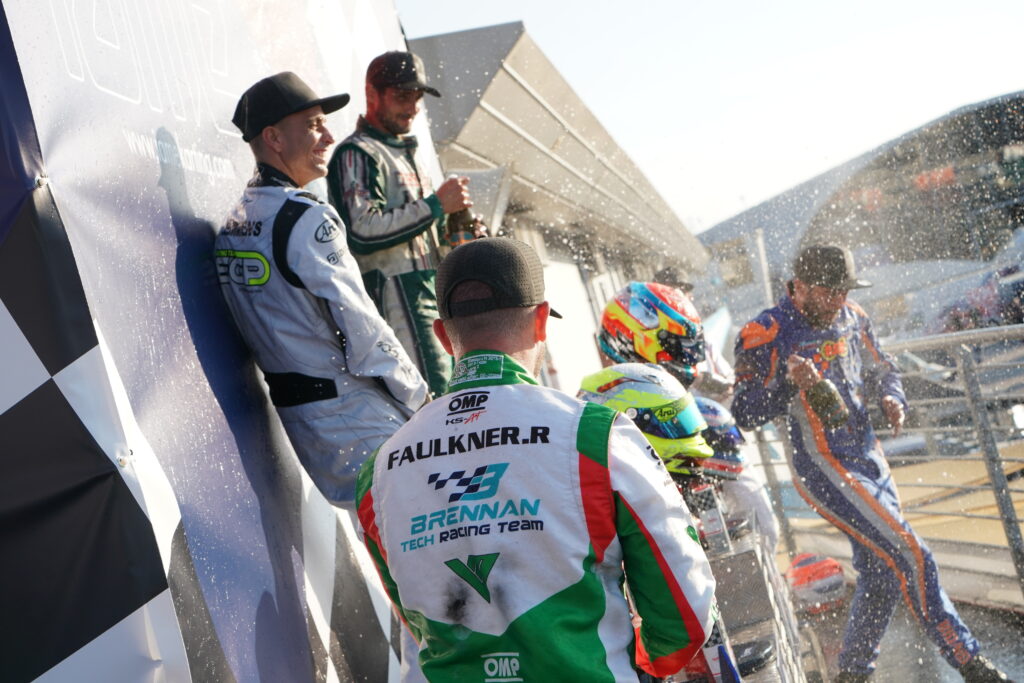 In X30 Senior the Italian Danny Carenini (#473 Autoeuropeo/Tony Kart-Iame) claimed a great win as he managed to have the best of the driver that seemed to be destined to the win: the World Champion Callum Bradshaw (#408 Strawberry Racing/Tony Kart-Iame-Komet), who dominated qualifying taking the pole position and winning the heats. Danny Carenini took the lead a few laps into the Final and kept it all the way to the flag, while Callum Bradshaw lost some positions and crossed the finish line in third place at the end of a spectacular sprint to the line that was won by his teammate the Brit teammate Mark Kimber (#410 Strawberry Racing/Tony Kart-Iame). The fourth place went to Riccardo Colombo (#490 Autoeuropeo/Tony Kart-Iame), who proceeded Sebastian Hedin (#445 KH Racing/BirelART-Iame) and Elie Goldstein (#464 VDK/KR-Iame). 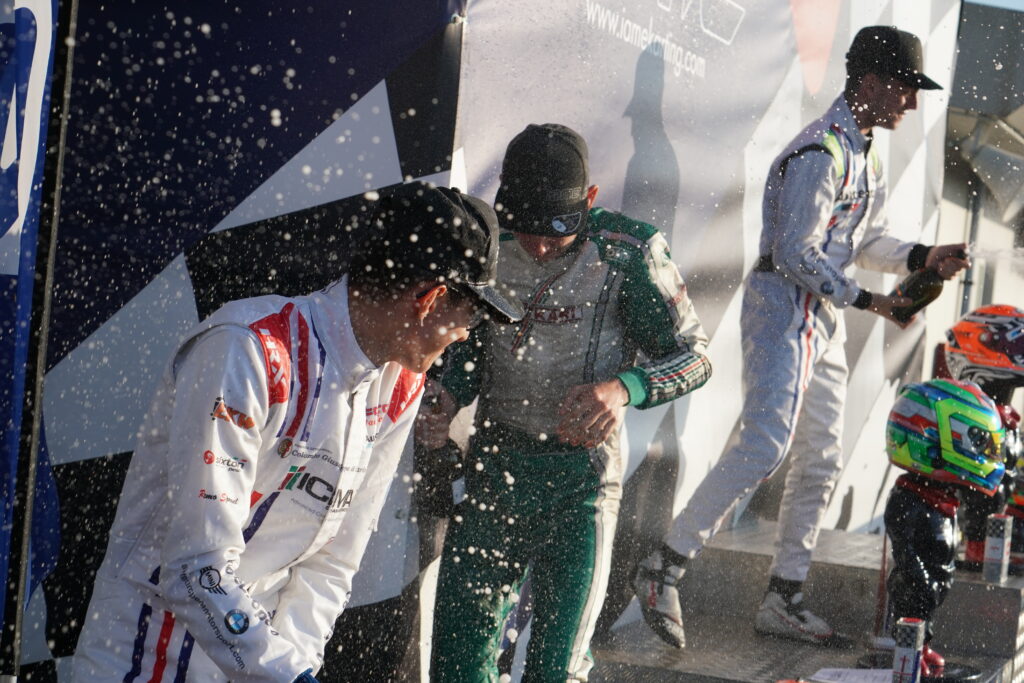 The Final of X30 Junior was quite hard-fought after qualifying that proposed several contenders for the win. The final victory was battled out by 6 drivers in a highly-spectacular race. Eventually, the Brit Gabriel Stilp (#233 Stilp/Croc Promotion-Iame-Komet) had the upper hand after several position changes and took the win in a heart-pounding sprint to the line that involved also the Brit Oliver Stewart (#222 Jade Racing Team/BirelART-Iame). The third place went to the French Theophile Nael (#210 Nuvolini/KR-Iame). He proceeded the other Brit Marcus Luzio (#234 Strawberry Racing/Tony Kart-Iame), who led the race in the initial laps, while the Brit Bart Harrison (#204 Mick Barrett Racing/Red Speed-Iame) ended fifth after starting from the pole position. The British driver Harry Burgoygne (#229 Strawberry Racing/Tony Kart-Iame) ended sixth. The French Ethan Pharamond (#212 Pharamond/Kosmic-Iame), the Brit Leo Robinson (#226 Fusion Motorsport/Exprit-Iame), the Brit Vinnie Phillips (#206 Phillips/Tony Kart-Iame) and the French Paul Alberto (#215 Alberto/Tony Kart-Iame) rounded off the top-ten. 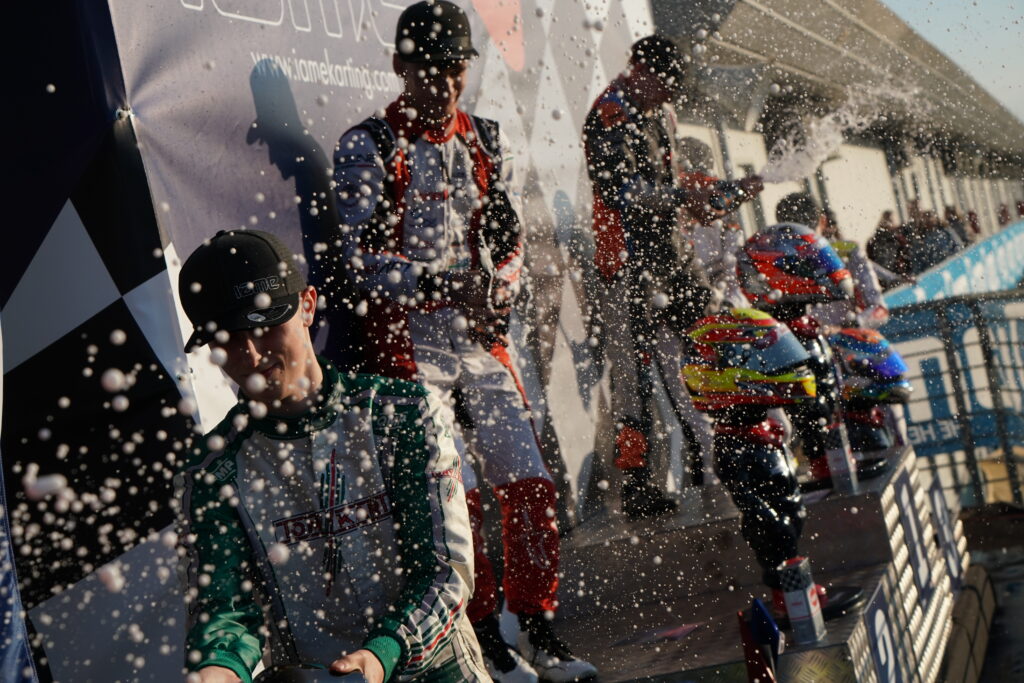 Complete results are available at https://iwf.iamekarting.com/