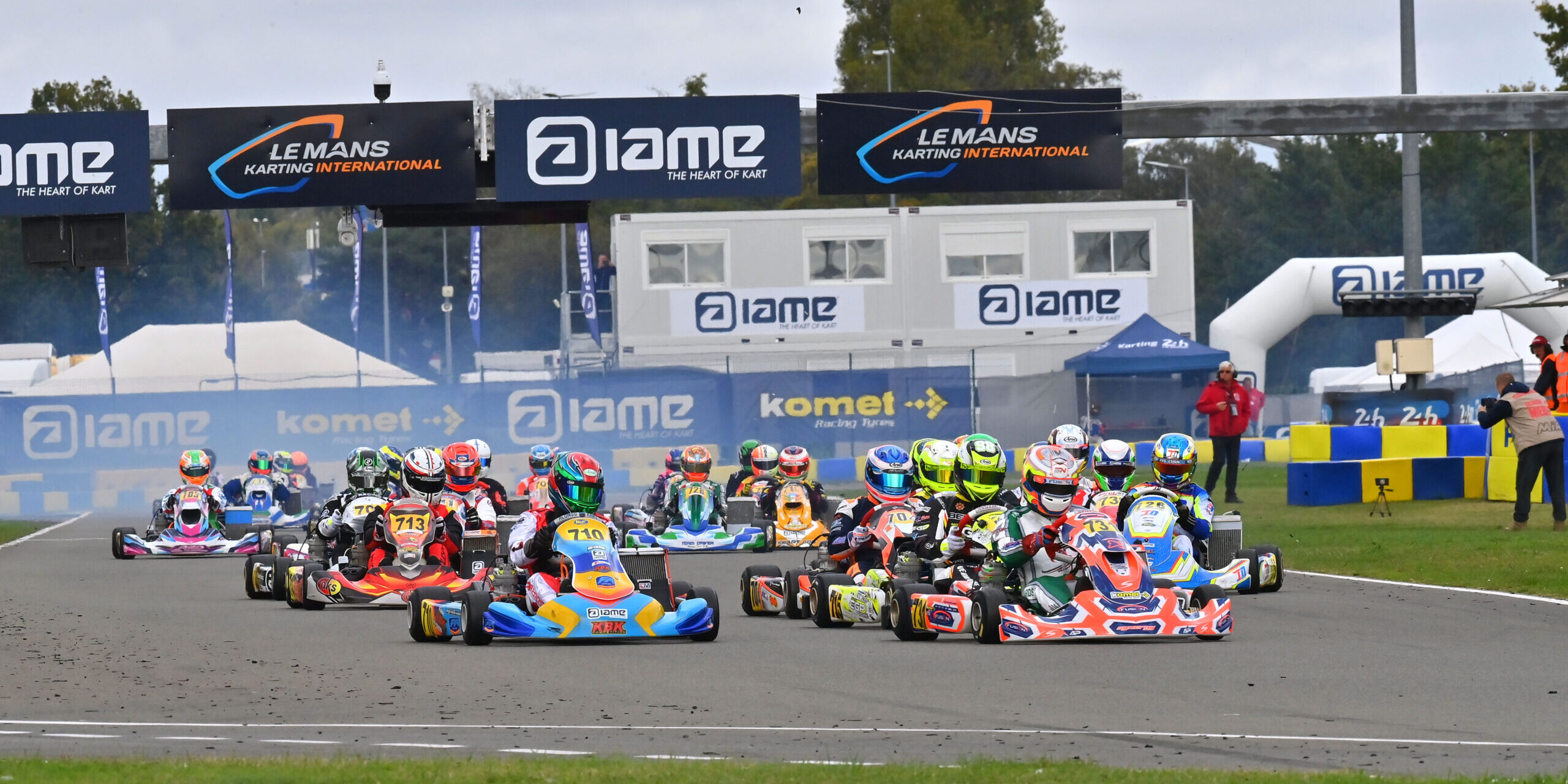 The four finals held on the Le Mans international circuit gave rise to a very high level of spectacle and to a continuous turnaround, favoured by the quality and homogeneity of IAME Karting engines. The rain having definitively decided to leave the Sarthe region, the Warriors were able to take advantage of dry conditions for this last day dedicated to the pre-finals and finals. The first winners of the IWF22 are known: Gianmatteo Rousseau (PAN) in X30 Mini, Julien Chastenet (FRA) in KA100, Fabrice Frete (FRA) in X30 Master and Markus Kajak (EST) in Z-I.

This first part of the IWF kept all its promises. From 20 to 23 October, the X30 Junior and X30 Senior categories should bring even more excitement!

British driver Noah Baglin, American Keelan Harvick and Dutch Dean Hoogendoorn won their respective pre-finals and took the three best places on the grid for the final. Hoogendoorn and Baglin managed to open up a gap at the beginning of the race, before being caught up by the pack. This was followed by a lot of overtaking. At the beginning of the last lap, six young drivers were fighting wheel to wheel, ready for a great ending to win their place on the podium. Hoogendoorn was pushed by the leader Kit Belofsky (GBR) when he tried to pass him just before the finish line. He ended up in the grass and lost all his chances. Belofsky was penalized by 10 seconds for this and let Panamanian Gianmatteo Rousseau win this so famous international event.

Spaniard Alex Martinez was also penalized and lost the podium. Irish driver Daniel Kelleher set the best lap and finished second ahead of Noah Baglin, who narrowly saved his place in the top-3. Filippo Sala (ITA) made a great comeback from 13th position. A contact at the beginning of the race pushed Harvick back to 5th place ahead of Roman Kamyab (GBR). The Belgian Antoine Venant and the British Riley Cranham, who was the main animator of the qualifications, were probably the most unlucky on Sunday. 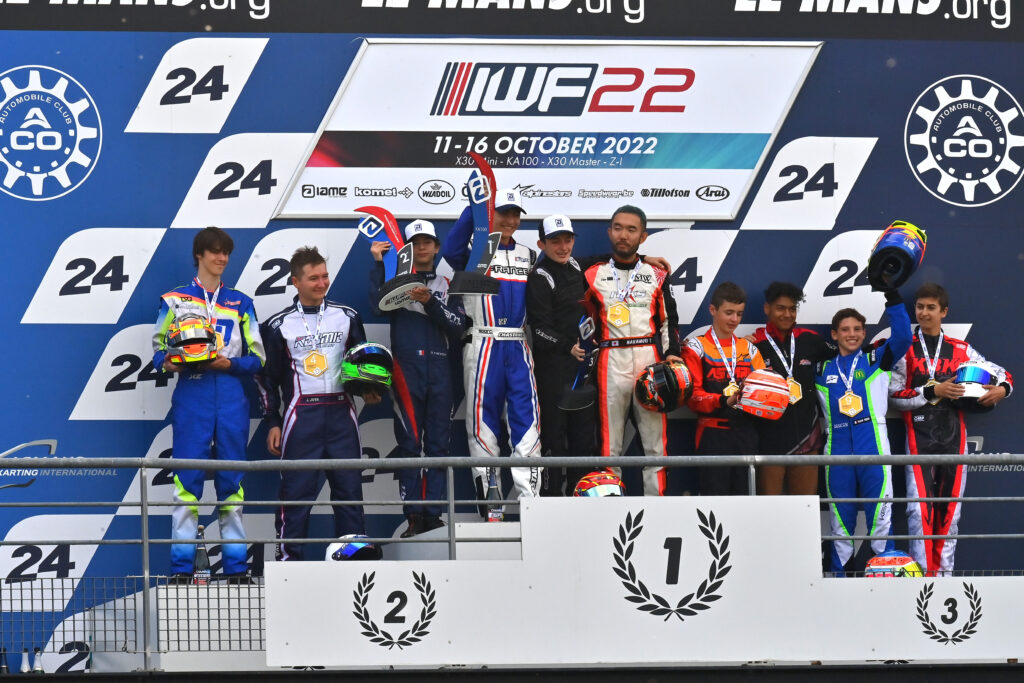 Eleven drivers passing under the chequered flag with a gap of only 1.2 seconds shows the attractiveness of the IAME Karting promotion category. Sporting fairness reigned throughout the race. No driver managed to escape in the final, which favoured the return of Julien Chastenet to the front. Chastenet had plunged to 17th position at the beginning of the pre-final following a collision. He came back to 10th on the grid of the final and overtook his opponents one by one to win the first edition of this KA100 final.

Lilian Forny led the final for several laps, before losing everything after a collision. Ewan Carrot then made a great effort to take the lead, but he finally had to be satisfied with the third step of the podium. Rafael Theveny came back from 9th place with the best lap to become runner-up. The Frenchmen thus achieved the triple for his country ahead of Finn Johan Vilo and Japanese Takeharu Nakamori. 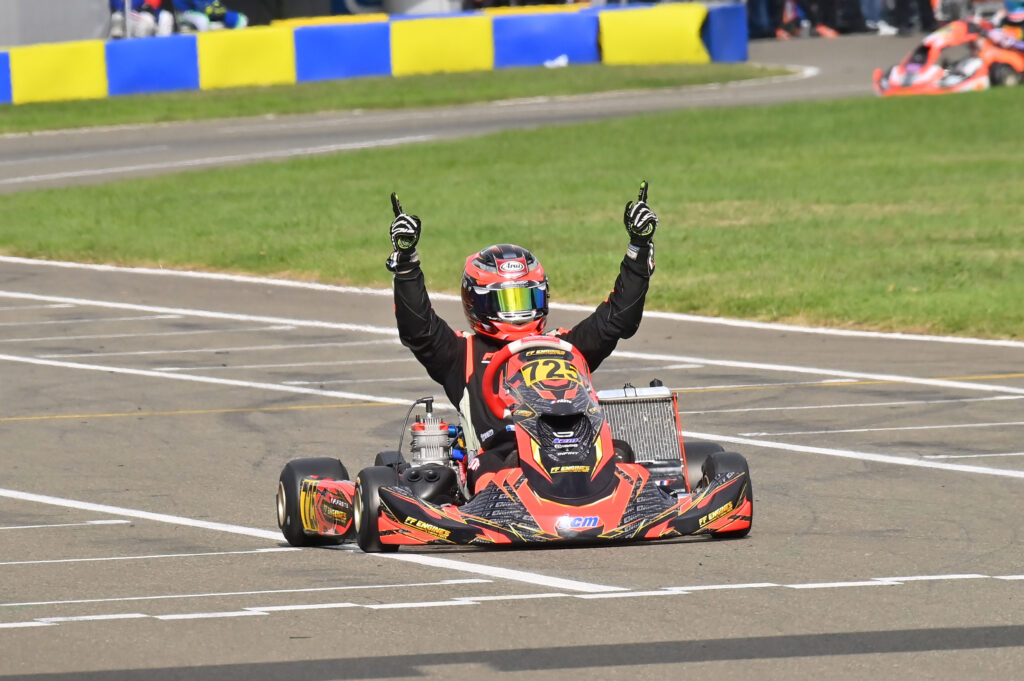 Already at the forefront in the qualifying heats, Frenchman Fabrice Frete proved to be the strong man on Sunday in the 30+ age group. He started by overtaking his compatriot Guillaume Barbarin in the pre-final to take pole position on the grid for the final. He made a perfect start and quickly escaped to victory, leaving his rivals to put on a show for the podium. Frete, who is well known for his engine skills, also proved to be a talented driver.

Behind him, Barbarin was heckled in the chasing group and fell to 5th position. Frenchman Maxime Bidard, a fine strategist on the Le Mans track that he knows perfectly well, overtook Belgian Kevin Lemmens and then Irishman Gary Edwards to take second place, while setting the best lap. Edwards held off Lemmens until the end and completed the podium. Jeoffrey Rouchy (FRA) crossed the finish line in 6th position just behind Barbarin. 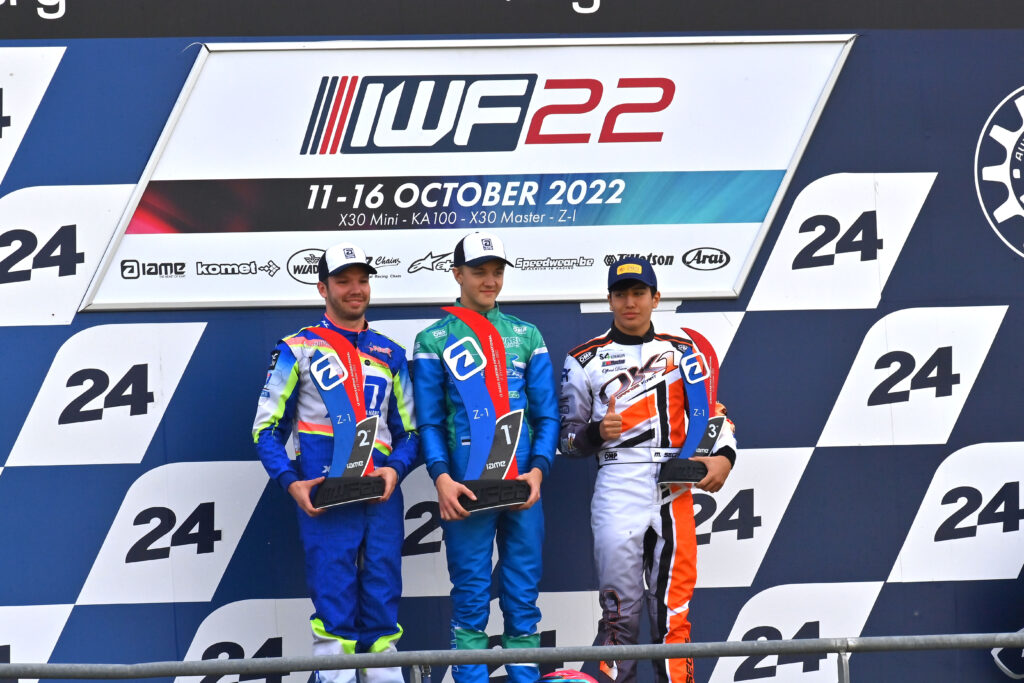 Pole position holder, leader after the qualifying heats and winner of the pre-final, Estonian Markus Kajak was looking forward to a victory in the final, where he could fear the very competitive Belgian Thomas Cypers. After the lights went out, Cypers was able to follow in the wake of the leader and even set the best lap in the race on the 5th lap. Feeling the pressure of his opponent, Kajak didn’t let himself be distracted and accelerated the pace, in order to protect himself from an attack of the Belgian. Even if Cypers was never far away from the Estonian, he was unable to attack. Kajak thus achieved a well-deserved international victory.

An intense duel took place behind the leading duo between five drivers who all felt the possibility to reach the podium. Despite the pressure, Italian Matteo Franco Segre won this uncertain battle! Following a 10-second penalty, Swedish Patrik Jansson left his 4th place to Christof Huibers, a great animator of the race. Belgian Sam Claes moved up from 12th to 5th place. Estonian Ken Algre dropped from 5th to 8th place due to a penalty and French Enzo Lacreuse was forced to retire after having come back to 3rd.