IWF 2022 – Tricky conditions for the beginning of the qualifying heats 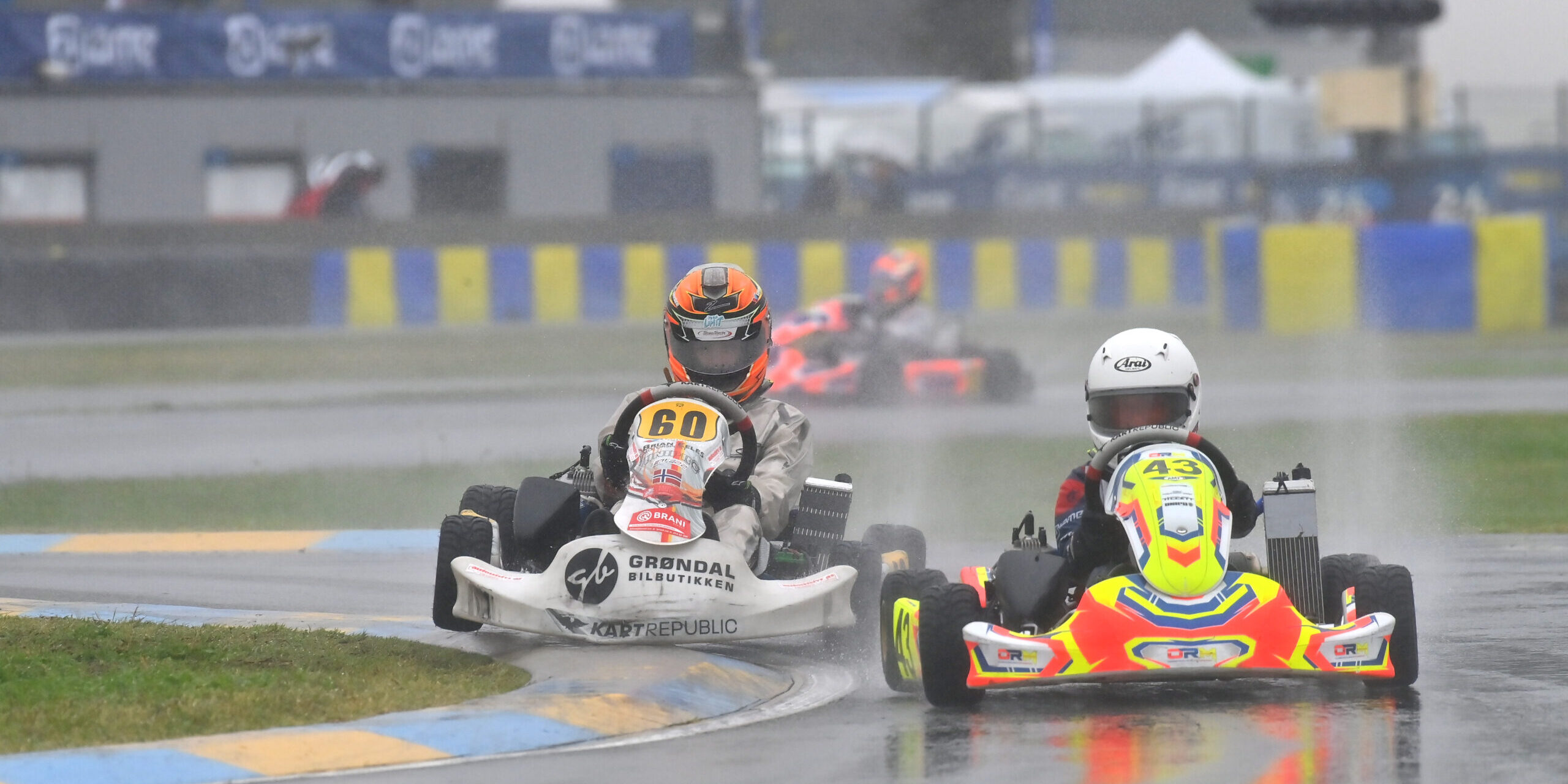 After settling over the Le Mans International Circuit on Thursday during qualifying practice, rain clouds remained stationary in the sky in this region of western France, forcing the drivers to use Komet rain tyres throughout the 17 qualifying heats on Friday. These difficult conditions did not prevent the drivers from putting on a show on the track, with many overtaking moves. Nevertheless, the hierarchy is far from being fixed, as many heats are on the programme on Saturday, before the much awaited final stages on Sunday. The IWF22 still has many surprises in store for us.

As expected, the first races of the IWF were very exciting in all categories: X30 Mini, KA100, X30 Master and Z-I. The Warriors lived up to their name throughout the day. Despite the rain, very few collisions were recorded, proof of the dexterity of the drivers present for this great event organised by IAME Karting. While some were doing their utmost to move up the rankings after what they hoped would be a better qualifying session, others confirmed their ease on the slippery Le Mans track. This event 1 of the IWF 22 – before the X30 Senior and X30 Junior next week – is far from over! Let’s take a closer look at the drivers who made their mark on this Friday 14 October. 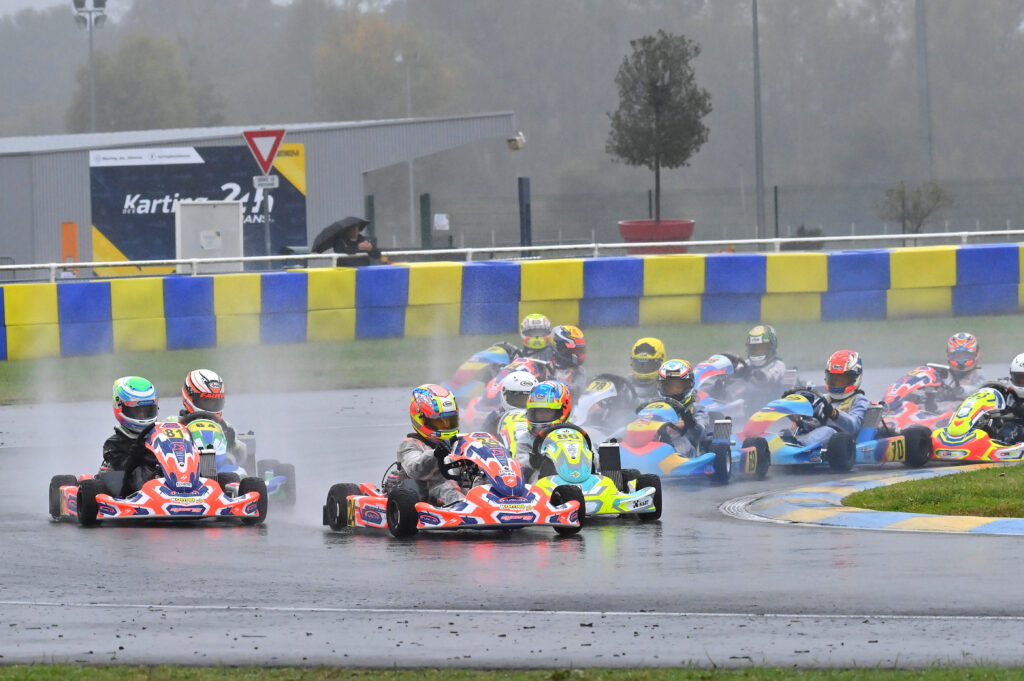 After the qualifying practice sessions, the drivers were divided into six groups, from A to F, which corresponds to five rounds per driver from Friday to Saturday. Two groups only contested two heats, while the others contested three. So there is still a lot to come for these young drivers! The 36 finalist places look to be highly coveted for the 88 drivers entered. So far, poleman Riley Cranham (GBR) has won three heats and Kit Belofsky (GBR) has won twice after starting in 4th position. Conor Clancy (ARE) made his mark in the E-F heat by moving up from 6th to 1st place. Jesse Phillips confirmed the competitiveness of the British drivers in the rain by winning a heat, which Dutchman Dean Hoogendoorn also managed to do. Henry Domain (GBR), Lewis Islin (GBR) and Daniel Kelleher (IRL) remain drivers to watch closely.

KA100: Ewan Carrot wins with ease all the heats 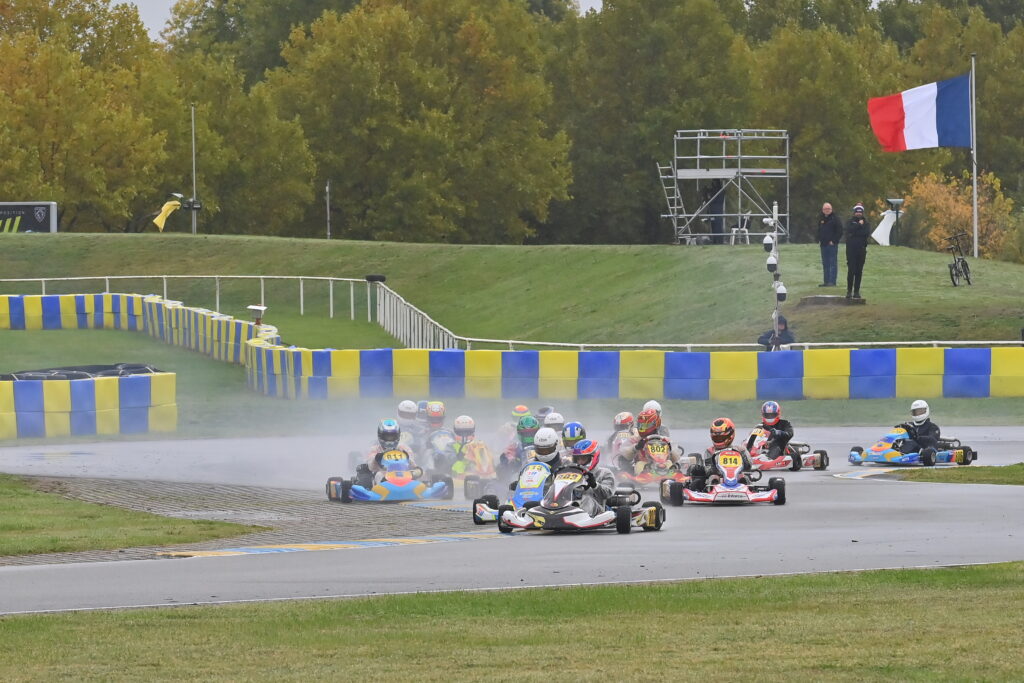 Everything is going well for Frenchman Ewan Carrot at the moment. The fastest in qualifying remained unbeatable in all three heats. In addition to his three best laps in a row, he crossed the finish line with a significant gap to the chasing pack. Finn Aleksi Peltoniemi finished twice 2nd in the field, before falling five places in the 3rd heat. The suspense for the podium is still there in this category. Like the Belgian Armin Pierle, several drivers have shown their worth in these rainy conditions, such as the Frenchman Julien Chastanet and the Japanese Takeharu Nakamori, who are both getting stronger. Johan Vilo (FIN), Rafael Theveny (FRA) and Eliott Couture (FRA) had a successful first round before ups and downs. Three rounds per driver are scheduled for Saturday.

X30 Master: Edwards without any mistakes 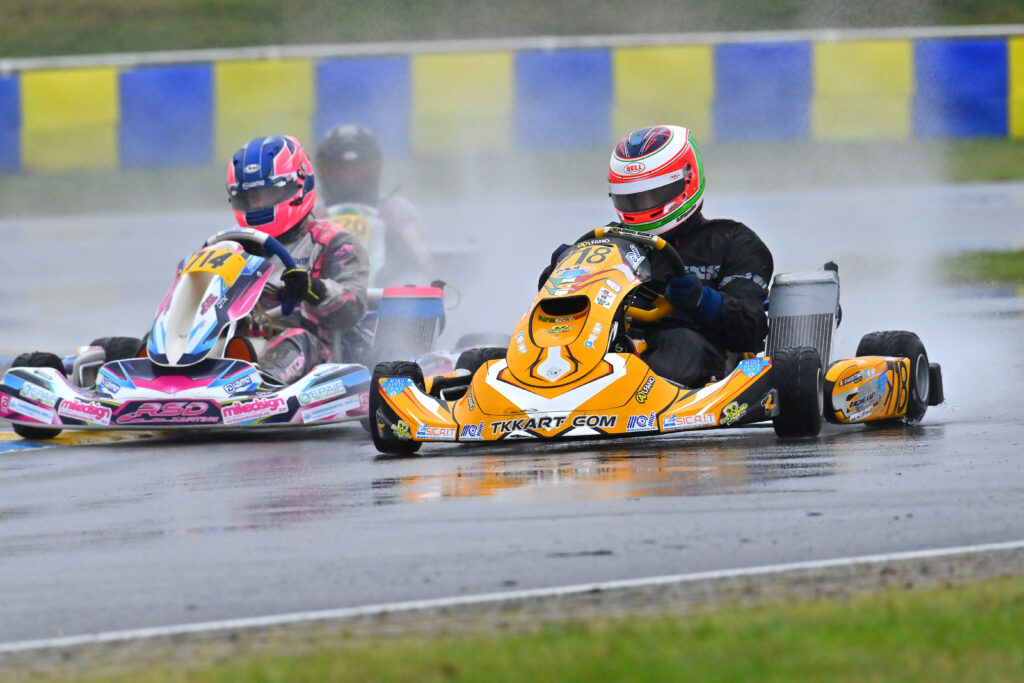 Two heats, two wins and two best laps: Gary Edwards has temporarily taken the lead over poleman Guillaume Barbarin, especially in the A vs B heat, when the Irishman faced the Frenchman, winner of a heat and always very fast. Frenchman Fabrice Frete, who finished second twice, was satisfied with his day. Finland’s Timo Adamsson confirmed his ease in the rain. Norwegian Tommy Kvakkestad Nordvang and Greek Panagiotis Kaitatzis made good breakthroughs in the pack, while Belgian Björn Verhamme remained well placed thanks to his regularity. Incidents or penalties prevented Maxime Bidard (FRA), Dean Hale (GBR) and Eric Chapon (FRA) from claiming better positions in the provisional ranking. Each driver will contest two more rounds on Saturday. 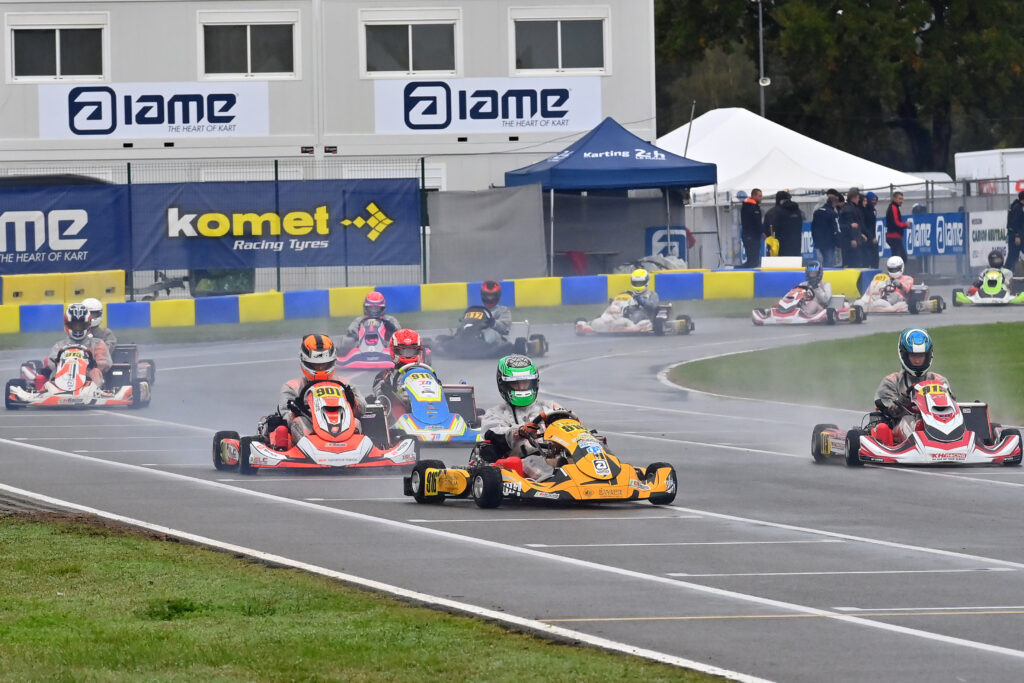 Who will stop Kajak? In the rain, the Estonian continues to impress in this 125cc gearbox class. In all three heats Kajak won with a good gap over his rivals, after taking pole position on Thursday. Only Christof Huibers prevented Kajak from achieving the three best laps, as the Belgian was the fastest in heat 2. Huibers was second twice, but was overtaken by Estonian Ken Algre in heat 3. After a difficult first lap that saw him lose precious places, Sweden’s Albin Karlsson recovered well afterwards by finishing twice 4th ahead of Belgium’s Thomas Cypers. However, the drivers are only halfway through and will compete three more times in these qualifying heats.

The program of the event in Le Mans