New leaders after the opening heats

The first day of racing in the Senior classes brought lots of drama and excitement with new drivers moving to the top of the field. The afternoon saw the worst conditions we have had so far, which provided some fantastic racing. 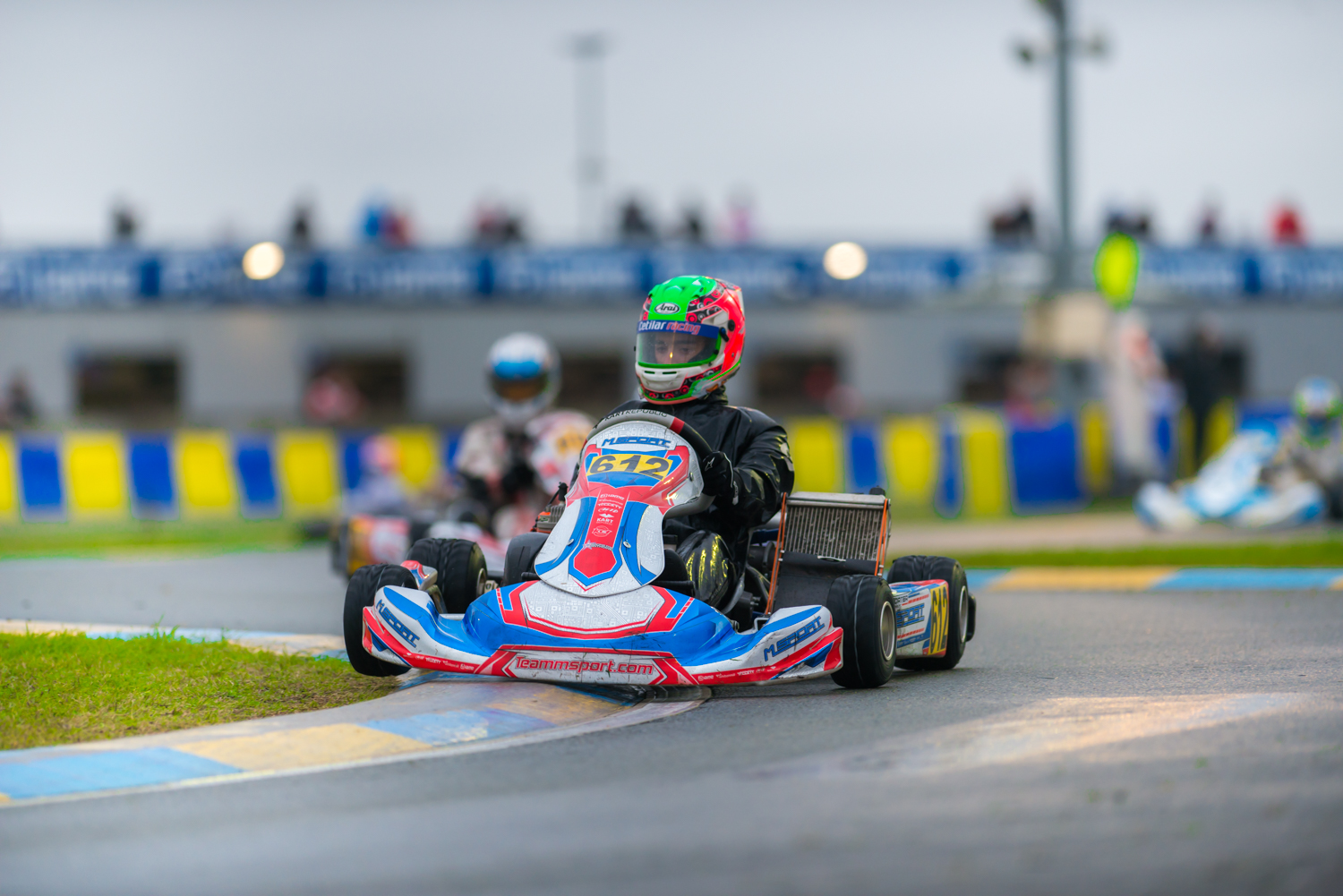 All 135 Senior drivers would race at least once this afternoon with Group C drivers racing three times. Included in Group C was Joey van Splunteren (NED) and the Dutch driver had no problems dealing with the tough conditions taking wins in all three races. He has now labelled himself the man to beat in a very competitive Senior class!

His performances become even more impressive with five different winners in the remaining heats in the shape of Gus Lawrence (GBR), Rivaldo van der Westelaken (NED), Ben Barnicoat (GBR), Caden McQueen (GBR) and Yann Bouvier (FRA). It reflected the depth in quality of the field and provided some brilliant racing.

All eight heats were very hectic to keep up with with passing often happening at every single corner. O’Neill Muth (GER) and Enzo Leveque (FRA) were the best of the drivers not to win a race with two second place finishes. Elie Goldstein (BEL) was another who has gone well on the opening day, but with some drivers having only completed one race it is still too early to call the real contenders.

The big story from Senior though, is van Splunteren’s dominance. With dry conditions forecast for tomorrow his task of continuing his win streak may become even tougher, but as long as he stays out of trouble he’ll now be very hard to beat to pole position. 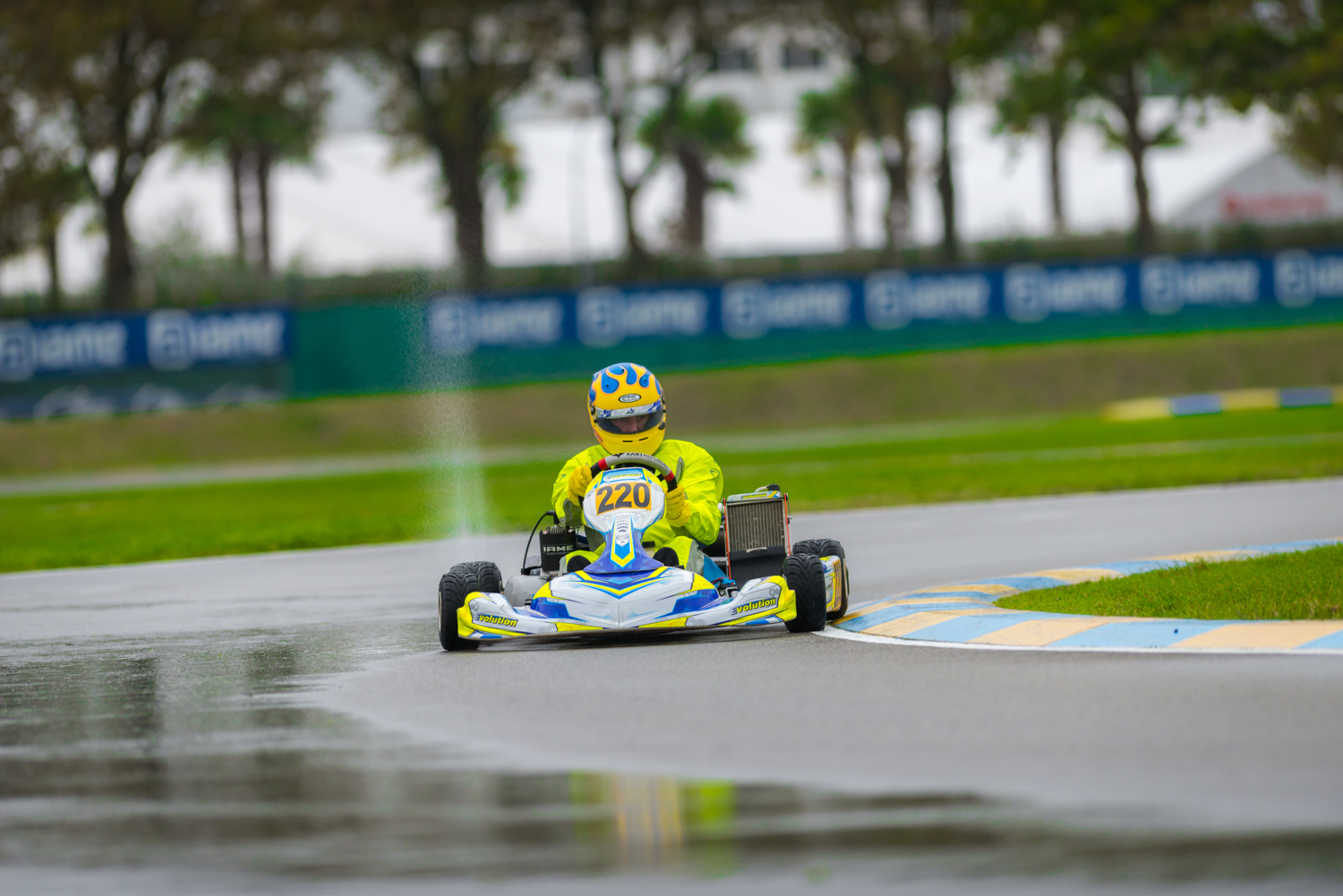 Pro – Battle of the Brits

The eagerly anticipated Pro class did not disappoint in their first heat this afternoon. With Lorenzo Travisanutto (ITA) and Taylor Barnard (GBR) amongst the big names down the field at the head of it there was immediate problems for Dean MacDonald (GBR) who took too much kerb under braking into turn one and spun in the greasy conditions. As we were briefly four wide behind, taking advantage of a chaotic start was Harry Thompson (GBR) who immediately built a gap, leaving the rest of the field to fight for second.

Franck Chappard (FRA) would be the driver to settle into second with Nikolas Pirrtilahti (FIN) third. With work to do Travisanutto and Barnard were calving their way through the field and were quickly on the brink of the top five. Ahead Morgan Porter (GBR) and Juho Valtanen (FIN) had worked together to get into third and fourth and began chasing Chappard. Travisanutto didn’t have it all his own way after a head to head with Westover which ended in the latter having a spin at turn two.

As the battling continued, up ahead Porter was on fire passing Chappard with four laps to go and he now had a 1.8 second to close to Thompson. It was a big ask, but Porter was able to rise to the challenge and going onto the last lap he was just three tenths back! As Thompson went defensive through the chicane he was delayed on the exit which allowed Porter to drive by and take the first win of the weekend.

Thompson finished second with Chappard third, penalties for Valtanen and Travisanutto saw Callum Bradshaw (GBR) promoted to fourth with Barnard an impressive fifth having gained fourteen places! After his first corner spin MacDonald would finish 15th despite a penalty. 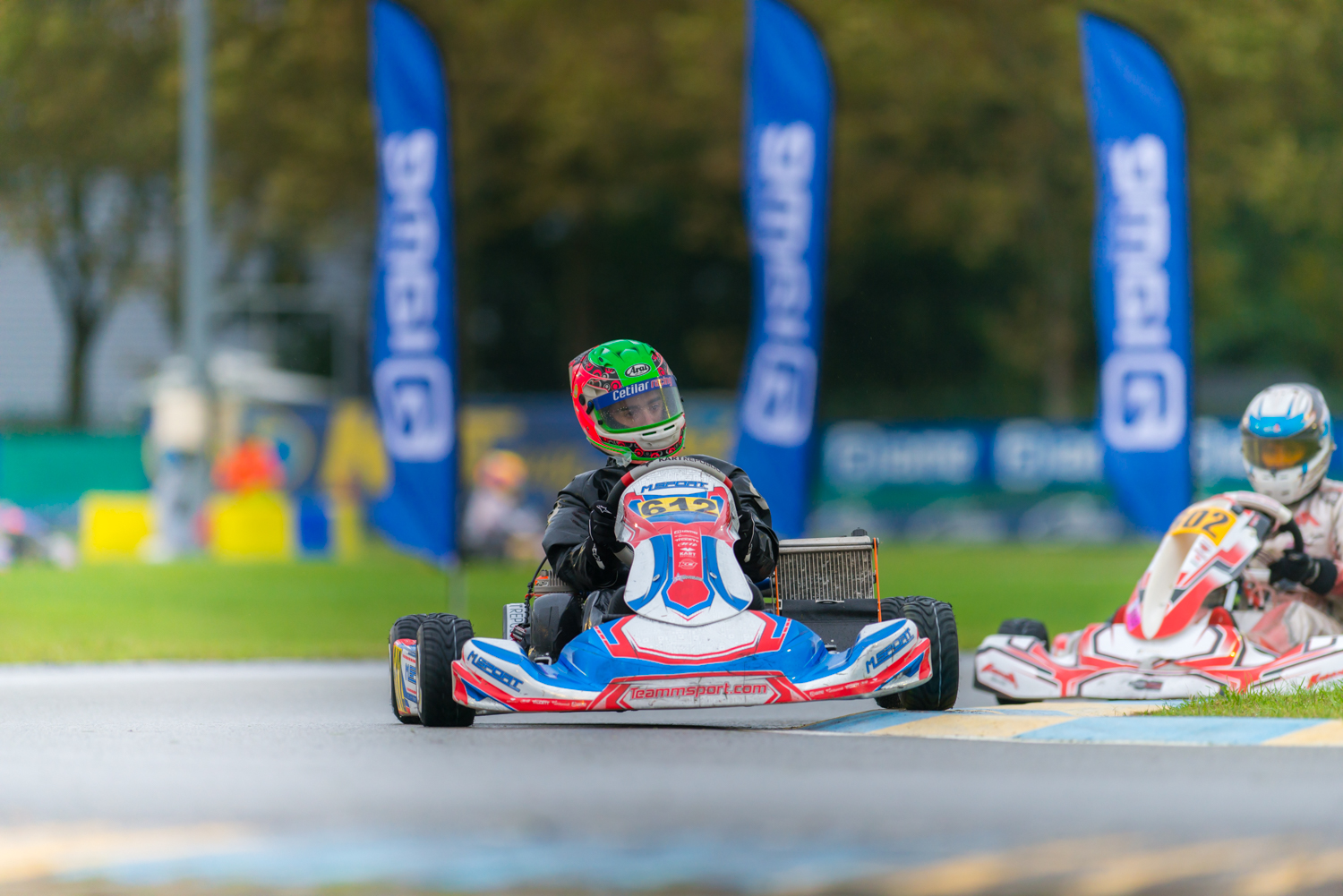 Can Morgan Porter (GBR) keep up his winning form tomorrow?

After Sten Dorian Piirimägi’s (EST) dominance in qualifying it seemed hard to bet against him today. But in the wet conditions Christof Huibers (BEL) had other ideas and after a lightening start, he was brave into turn one gaining five places to move up to second. Just two corners later and the Belgian had already disposed of Piirimägi and was never seen again as he took a commanding win of over two seconds.

Behind things quickly settled with Piirimägi the only driver able to get anywhere near Huibers finishing a comfortable second place. Thierry Delre (BEL) kept his name at the top with a solid third place finish after a penalty for Rowan Grinwis (NED) and there was an impressive performance from Gil Mertens (BEL) who gained fourteen places to finish fourth place!