Wednesday brought the first races of the IAME International Final and with it lots of rain. Five days of practice and qualifying had now boiled down to the first of three days of heat racing, with scattered showers of different intensities adding to the excitement.

Junior – Bearman does the double

With over 100 drivers in Juniors having one bad race can put your whole weekend in jeopardy. Staying out of trouble in the first two races was essential to get off to a good start and the drivers would each deal with one wet heat and one dry heat. Although on slick tyres for the second round of races, the track would still be damp in places at best, which took many prisoners particularly at the last corner!

Oliver Gray (GBR) kicked things off in the opening race and led teammate, Marcus Luzio home to take a comfortable one two finish in the wet. As Patrick Enok (EST) picked up a penalty in the second Oliver Bearman (GBR) cleared off out front winning by a comfortable five seconds from Aiden Neate (GBR) and Robert De Haan (NED). However, the most impressive in the first round of races had to be Oskar Algre (EST) gaining ten positions to take the win from Oliver Greenall (GBR) and James Wharton (AUS).

Despite rain in the air the second round of heats would be on slicks with wet patches making it difficult to overtake. But drivers certainly found space to do it with Pedro Aizza (BRA) up 20 and Oran England (IRL) gaining 23 positions! Out front keeping a clean pair of heels was key and Bearman stayed cool on his way to victory number two. Wharton and Cian Shields (GBR) would give us five different winners in the opening day of racing in Junior.

Bearman is the first to reach two victories and has gained room out front as a result, but we are still in the early stages with several drivers proving they have the pace to fight for the podium. 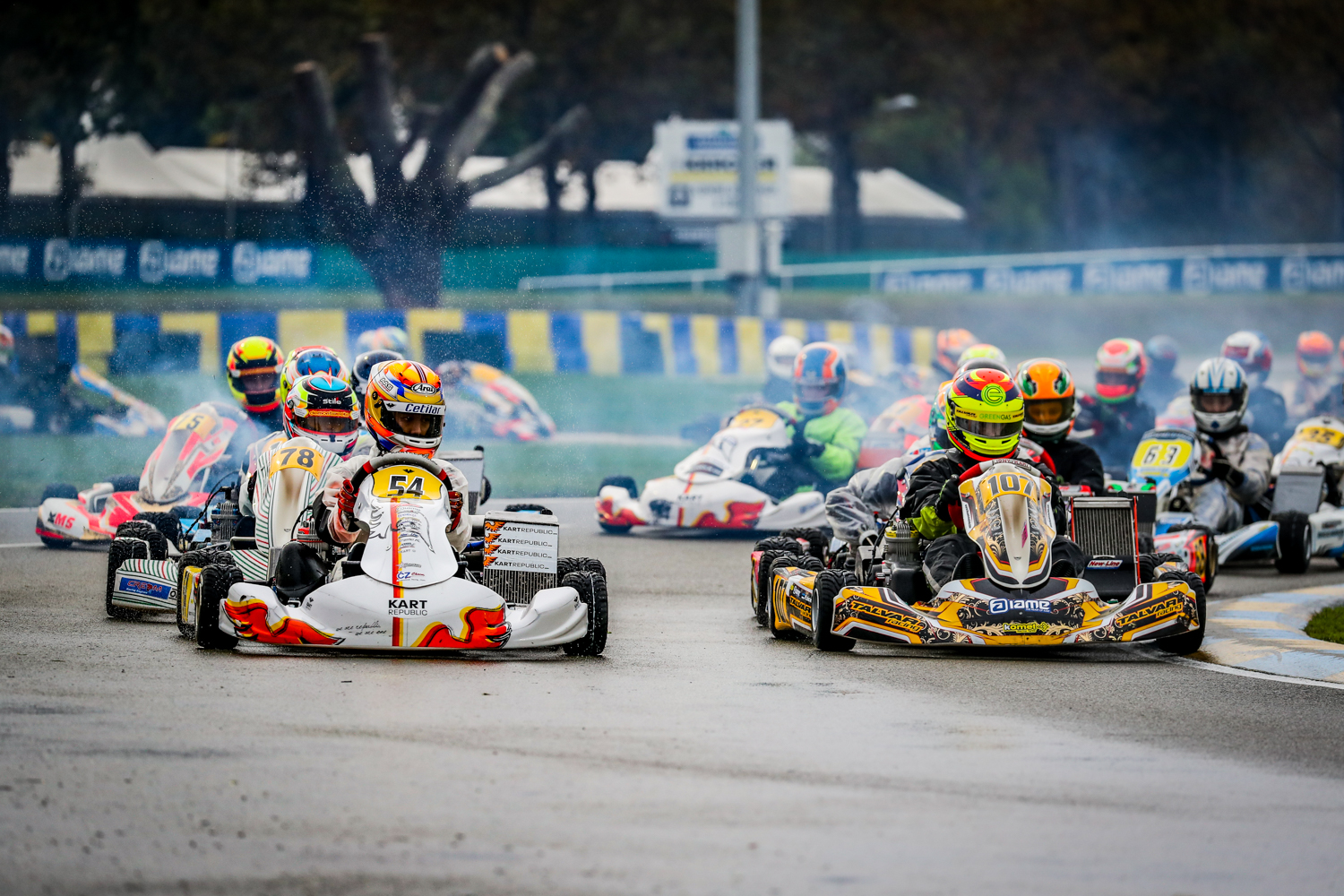 There were mixed conditions for the Junior Warriors to deal with

The Master class would see no dry racing at all and living up to their name the first races were both clean affairs with no real surprise results. Julien Poncelet (FRA) and Sebastian Bielande (BEL) both won from the front row with Raymie Eastwood (IRL) and Stephen Nuvolini (FRA) for company. Johan Renaux (FRA) didn’t make the best start after his pole position yesterday with ninth in the opening race.

The start of the second heats is where things got interesting. With the Juniors out on slicks and drying the track, most had seen no reason to choose anything different, but some of the tail enders and veteran drivers looked at the gathering clouds and decided a gamble on wets was worth a shout and it was a call that would turn the field upside down.

As the heavens opened when the karts took the track it was now too late to change to wets and the few that had were now fighting for victory no matter where they were starting. Despite a spin Simon Ramseyer (IRL) just did enough to beat Vesa Salminen (FIN) from 23rd on the grid with the Salminen starting on his outside! Franck Darbonville (FRA) climbed 17 spots to finish third with Bielande the first of the slick runners in fourth, 34 seconds behind the leader.

With time to make changes Poncelet put on a master class in the final race cruising to a comfortable second victory ahead of Kenneth Hildebrand (EST) and Patrick Pearce (GBR) who did not start his first heat. Poncelet takes the early advantage, but still has the likes of Bielande and Nuvolini for close company.

The Mini class is arguably the most wide open in the early stages with four different winners coming from the first four heats. Taking the spoils would be William Go (CZE), Kean Nakamura-Berta (JPN), Max Garcia (USA) and Freddie Slater (GBR) giving us four different nations from three different continents represented at the top!

It’s Slater who currently heads the scores having finished third before dominating his second, with Harry Burgoyne (GBR) the best of the drivers not to win taking two second place finishes. Leo Robinson (GBR) and Christian Miles (USA) have also looked impressive in the early stages giving us every chance of seeing even more winners added to the current list tomorrow.

James Anagostiadis (AUS) had a mixed start to his #IIF19 campaign

The youngest of our warriors had mixed conditions to deal with in their opening two races with the second heat providing some of the worst of the conditions we had seen all day! Heat one saw a close fight at the top between Zach Knight (GBR), Hugo Martinello (FRA) and Alex O’Grady (IRL) all the way to the flag with Knight just holding on to take the win. The trio were also joined by Macaulay Bishop (GBR) and Alfie Slater (GBR) who would both be disqualified post-race.

Battle would resume in heat two under traitorous conditions in a shortened race. With slicks the only tyre available, just staying on the track was an achievement! But coping with them better than anyone was O’Grady and Bishop who would exchange places on the final lap to finish in that order! Martinello and Knight kept things close in terms of points giving Bishop more work to do tomorrow. 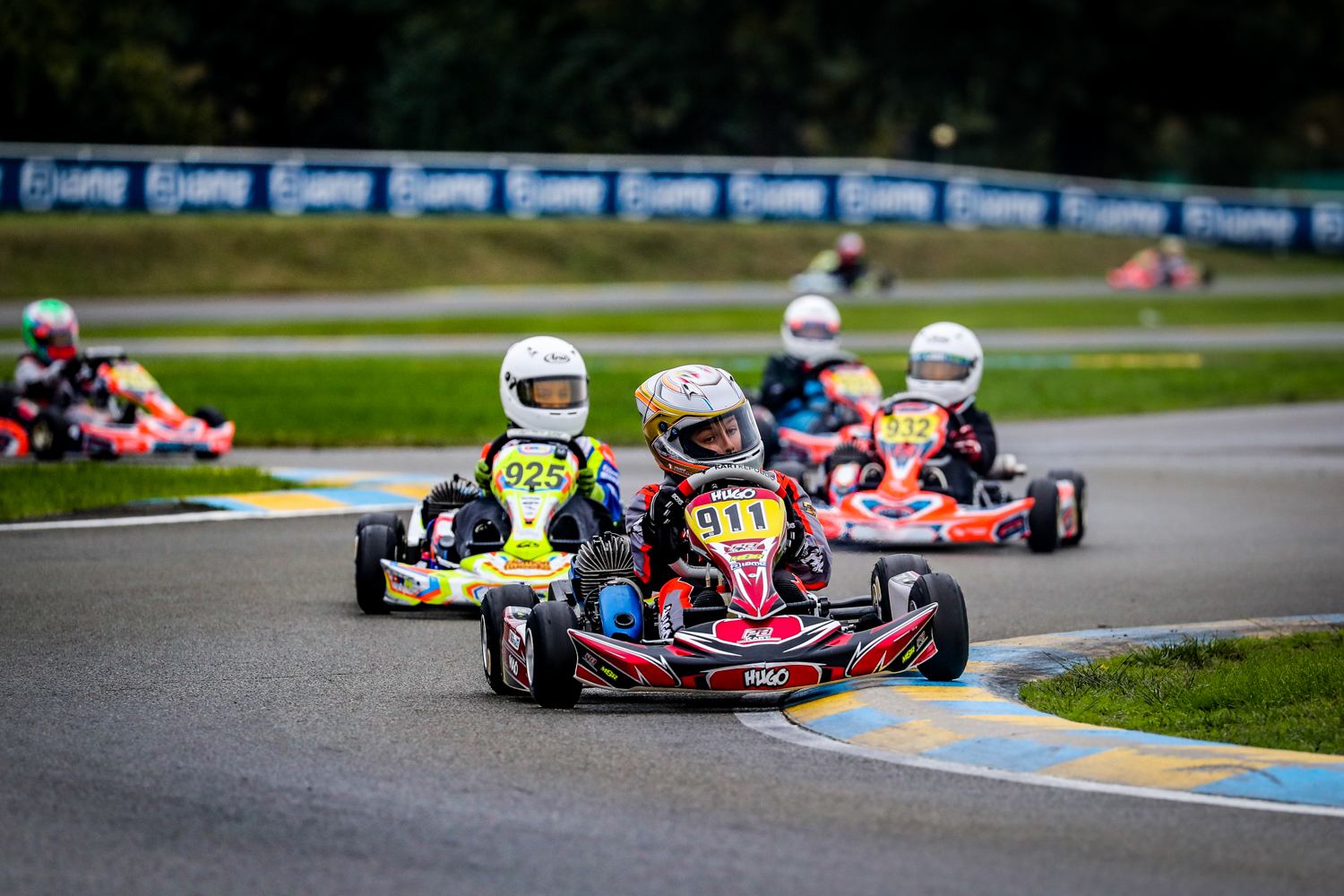