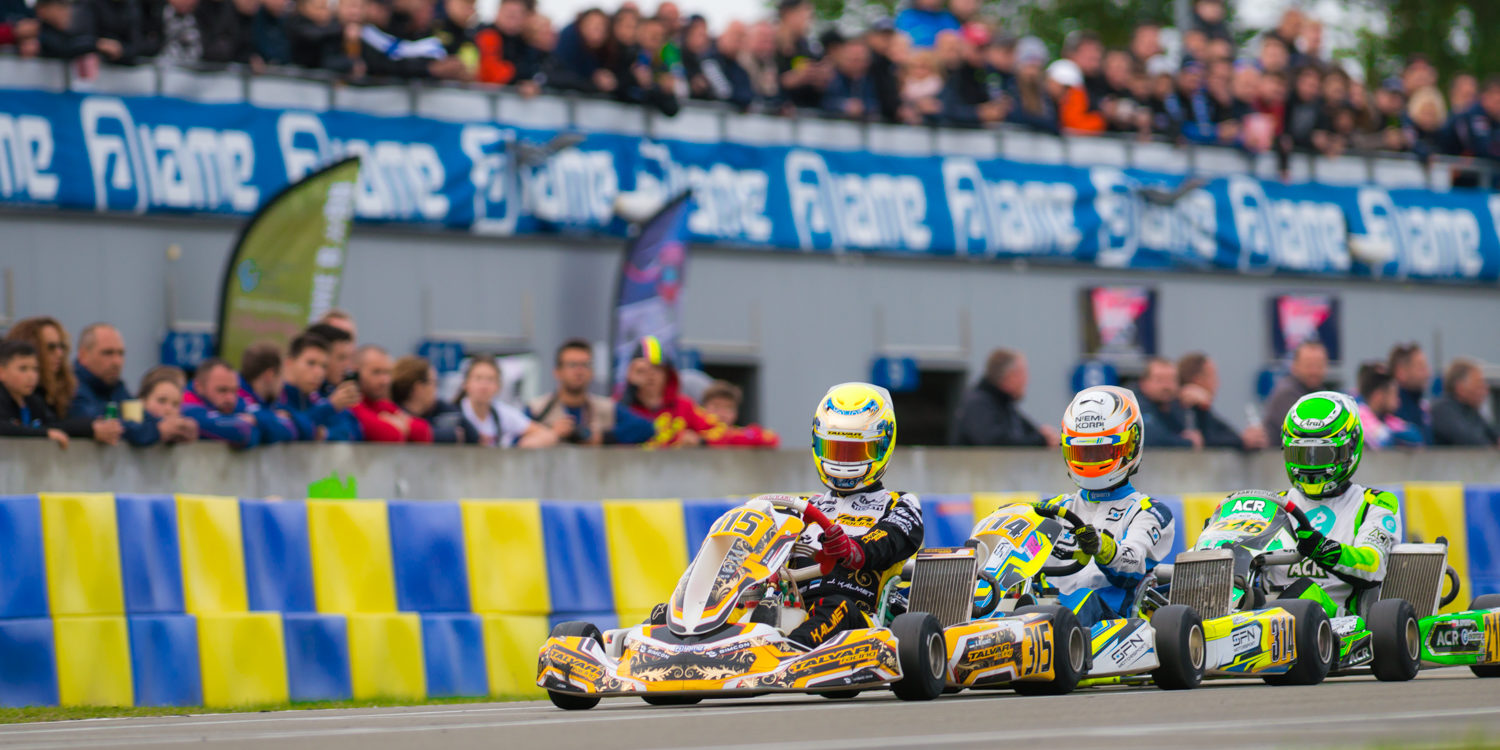 The 460 warriors were reduced to just 224 today with the last of the heats taking place before the Final C and Final B races. Unsurprisingly it was the latter that brought the highlight of the day with most going down to the final corner of the race.

The best was certainly saved until last with the Junior drivers putting on a fantastic show for for the huge crowds gathered around the Le Mans circuit. The paddock had stopped with everyone excited to see who was going to get the last spot in tomorrow’s final and it exceeded all expectations with the race coming down to the final straight!

The fight for the lead was exciting right from the start with the intensity never dropping off. Samuel Shaw (GBR) briefly led at the start of the race, but fell back on lap two with a fast starting Alfie Rigby (GBR) taking up the reigns having come through from eighth. Tom Lebbon (GBR) would stay close, but this was going to be far from a two horse race with Kyffin Simpson (USA) and Alessandro Cenedese (ITA) closing in.

As we hit the halfway point a change for second came with Simpson now hassling Rigby for the lead. It was almost a green light for the leaders to fight which was good news for Arvid Lindblad (GBR) who was flying through from thirteenth on the grid and was now in contention. Lindblad worked his way through to third with the top three now having a slight advantage going onto the last lap with Rigby still leading Simpson.

In an all or nothing situation with only a win good enough to race tomorrow, Lindblad tried a bold move around the outside at turn one and was rewarded with the lead sending the gathering crowds wild. But this race was far from over and Rigby was not willing to settle for second responding with a brilliant move down at the hairpin, before eventually taking the lead around the outside of the chicane.

The excessive fighting had brought early race leader Shaw back into the mix. After contact at the end of the back straight, with Lindblad desperately trying to retake the lead, Shaw was able to draw alongside Rigby going into the final two corners. Shaw managed to get the switchback on the exit, but Rigby did just enough and held on to win by 0.033 seconds from Shaw with the top seven covered by 0.670 seconds at the flag!

A mention must go out to Ivan Domingues (PRT) who gained an impressive 25 places to finish in ninth place have qualified through via Final C! 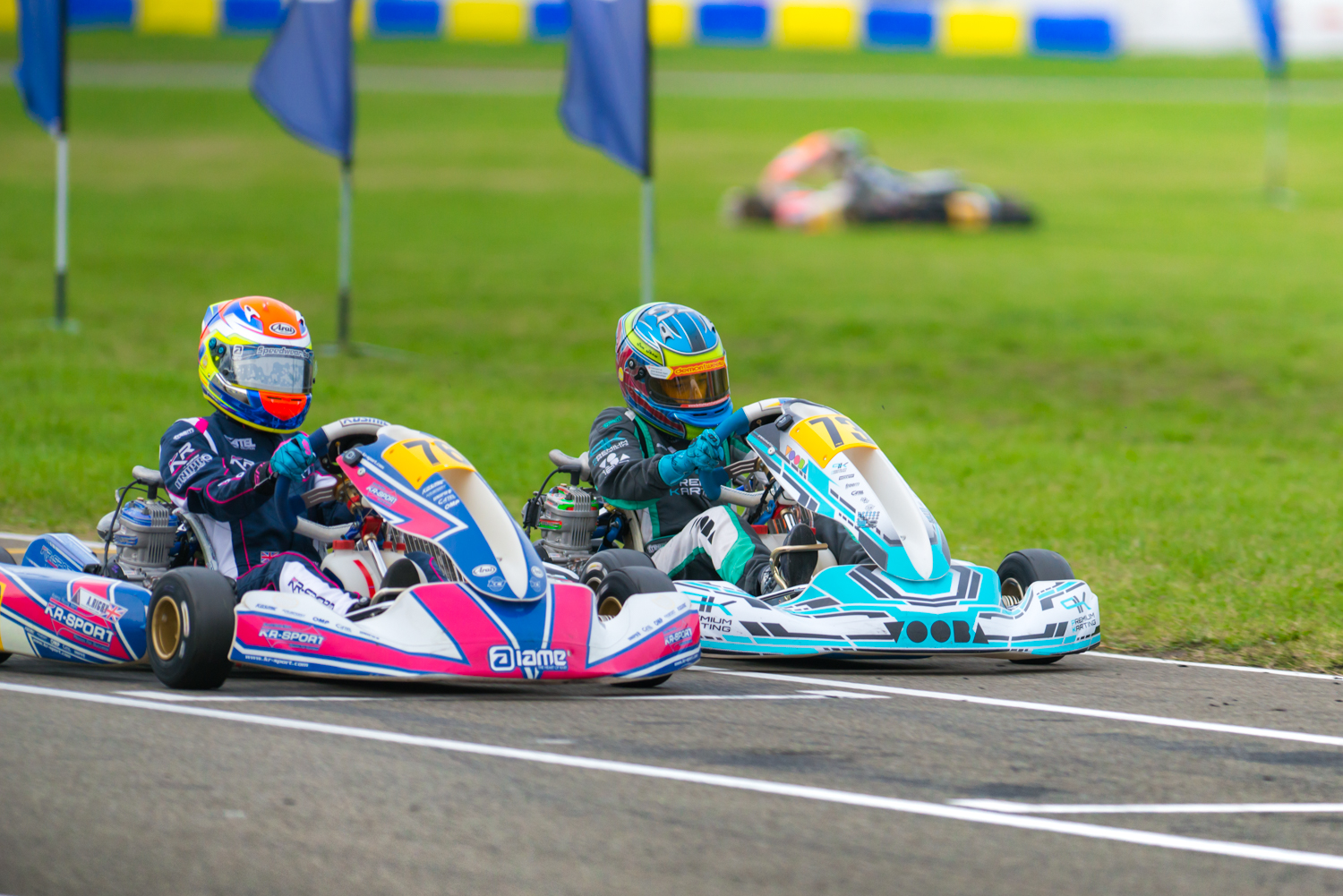 So close yet so far for Sam Shaw (GBR)

The Senior Final B race was highly anticipated as ever with some big names guaranteed to be missing out on a place in the final. Nick Smit (NED) made a brilliant start to the race and quickly settled in after gaining the lead from third place at the start. His lead was increased further with the chasing pack fighting behind which resulted in Arttu Salmela (FIN) gaining second place.

As Salmela hunted down Smit, behind there was more fighting with Georgi Dimitrov’s (GBR) persistence eventually paid off as he passed Corentin Collignon (FRA) for third. Whilst they were trading positions so were the leaders, Salmela now led proceedings with Dimitrov on a roll as he worked his way through into second.

But the fighting had brought more drivers into the mix including Cody Gillis (AUS). The Australian was, at times, quickest on track and made fast progress to get into third by the halfway stage of the race. His inheritance of third came with an immediate gap and he was soon passed Dimitrov with only Salmela to go.

Gillis was sensible in his approach when it came to fighting for the lead, he seemed in no rush to take the lead and waited for the laps to tick down before making his move on the penultimate lap down at turn one. Salmela was not going to give up there and piled on the pressure bringing Dimitrov back into contention. The trio would fight it out to the flag and in a clean battle it was Gillis who would do enough to hold on.

But post-race he would receive a front fairing penalty handing the final spot to Salmela, who did well to hold off Dimitrov. A special mention must go to Harry Platten (GBR) who finished fifth from 31st on the grid, setting the fastest lap along the way! 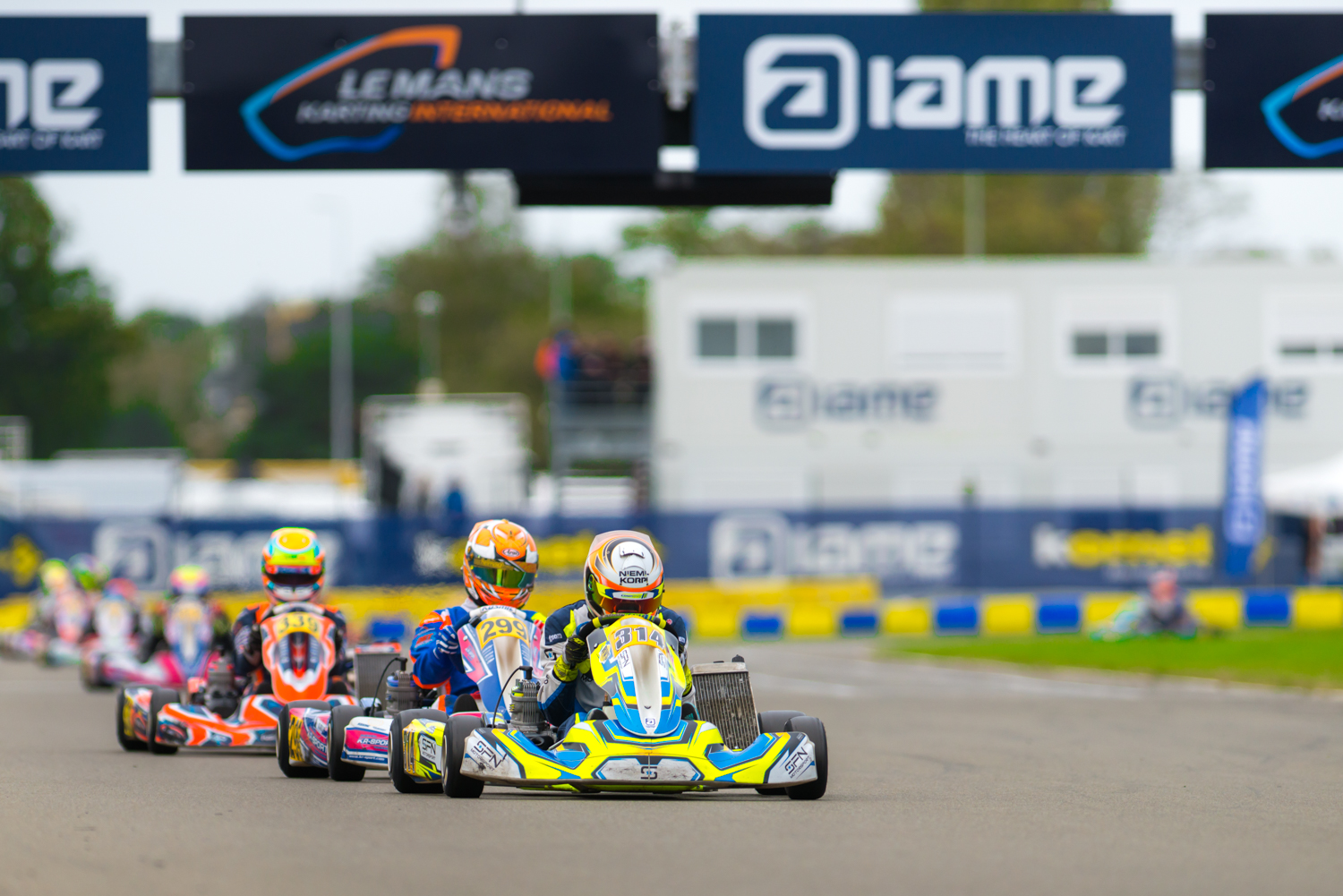 Starting from third, it didn’t take long for Sacha Van’t Pad Bosch (NED) to take the lead of the race and once there the Dutch driver never looked back. After some bad luck in the heats Sacha was one of many to be out if position, but had no problems qualifying for tomorrow’s racing eventually winning by over five seconds from Maximillian Dexter (ARE) and Yuchan Ian Qui (CAN).

Despite constant pressure from Mark Domaschenz (SGP) behind, Tony Lindholm (FIN) did well to stay focused in the lead giving Domaschenz no option but to settle for second. It became a two horse race for the lead as the laps ticked by and Domaschenz did enough to stay within touching distance, but Lindholm had the necessary pace required to respond to any challenges. It was clear Lindholm had worked hard for the win, celebrating across the line and the Finn will deservedly take part in tomorrow’s final. 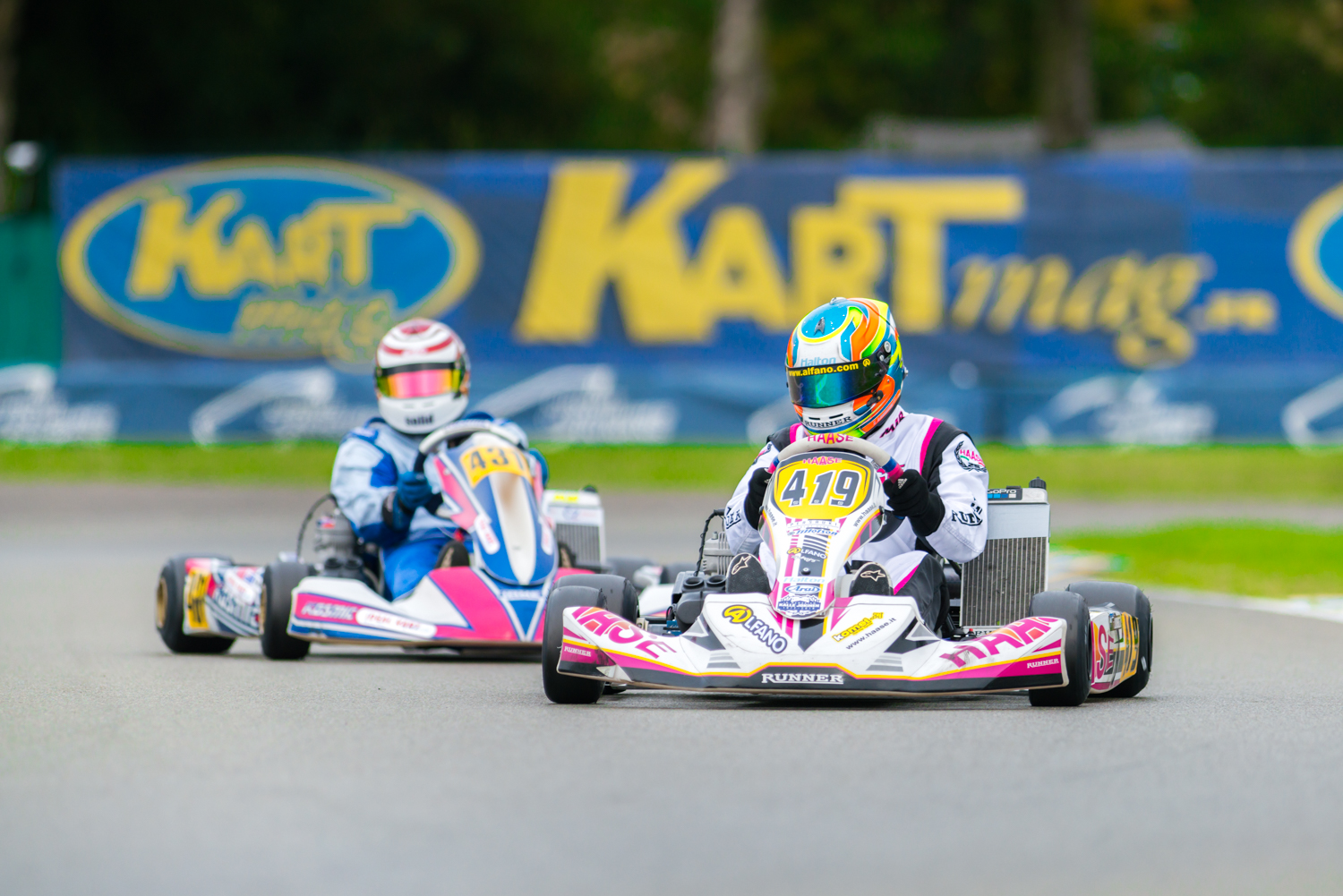 The final heat in Pro proved Dean MacDonald (GBR) can be beaten in a straight fight to victory. Having come back from his heat one spin, MacDonald was on two in a row before Harry Thompson (GBR) made himself a firm contender with a win. But neither will start from pole position, with three third places and a win Morgan Porter (GBR) will start on pole, with Thompson and MacDonald next along.

Callum Bradshaw’s (GBR) consistency has earned him fourth with the French fans having a strong chance of some celebrations tomorrow with Franck Chappard (FRA) on the inside of row three. Nikolas Pirttilahti (FIN) will be sixth with Taylor Barnard (GBR), Juho Valtanen (FIN), Danny Keirle (GBR) and Lewis Gilbert (GBR) round off a star studded top ten.

But there will certainly be interest further down the field with back-to-back World champion, Lorenzo Travisanutto (ITA) starting eleventh. 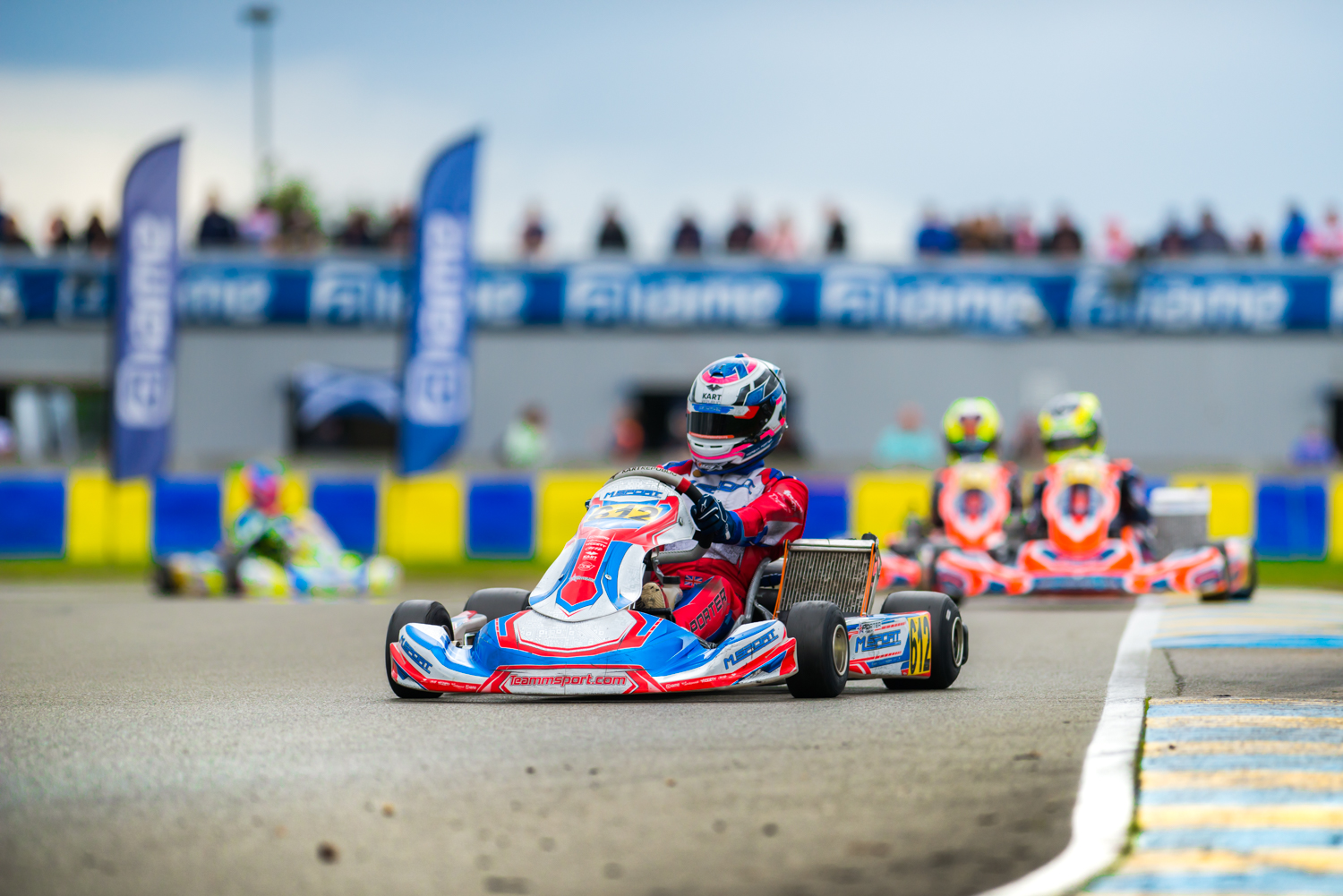 The Super Shifter final heat was the only race to be greeted by a shower, with rain falling after just six laps. It made things completely unpredictable with the intensity of the rain making it an achievement just to stay on the track. Sten Dorian Pirrimägi (EST) is gaining lots of momentum in this event and that was no different even in such traitorous conditions with the Estonian winning by five seconds making him the favourite for tomorrow’s final.

Quique Bordas (ESP) and Thierry Delre (BEL) will be second and third and if the final is in wet conditions then Christof Huibers (BEL) will seriously fancy his chances from fourth on the grid. Gil Mertens (BEL) has been the biggest improver since qualifying moving up from eighteenth to sixth.